A Happy New Year to all. We have had a great night in the Souk restaurant. The food was great & the staff were ready to party. We started off the dancing & then of course everyone followed suit. We have really enjoyed ourselves. We tried a selfie for the first time—efforts attached. Enjoy yourselves wherever you are & may 2014 bring all that you wish for. With much love to all our friends & family from Doug & Louise xx 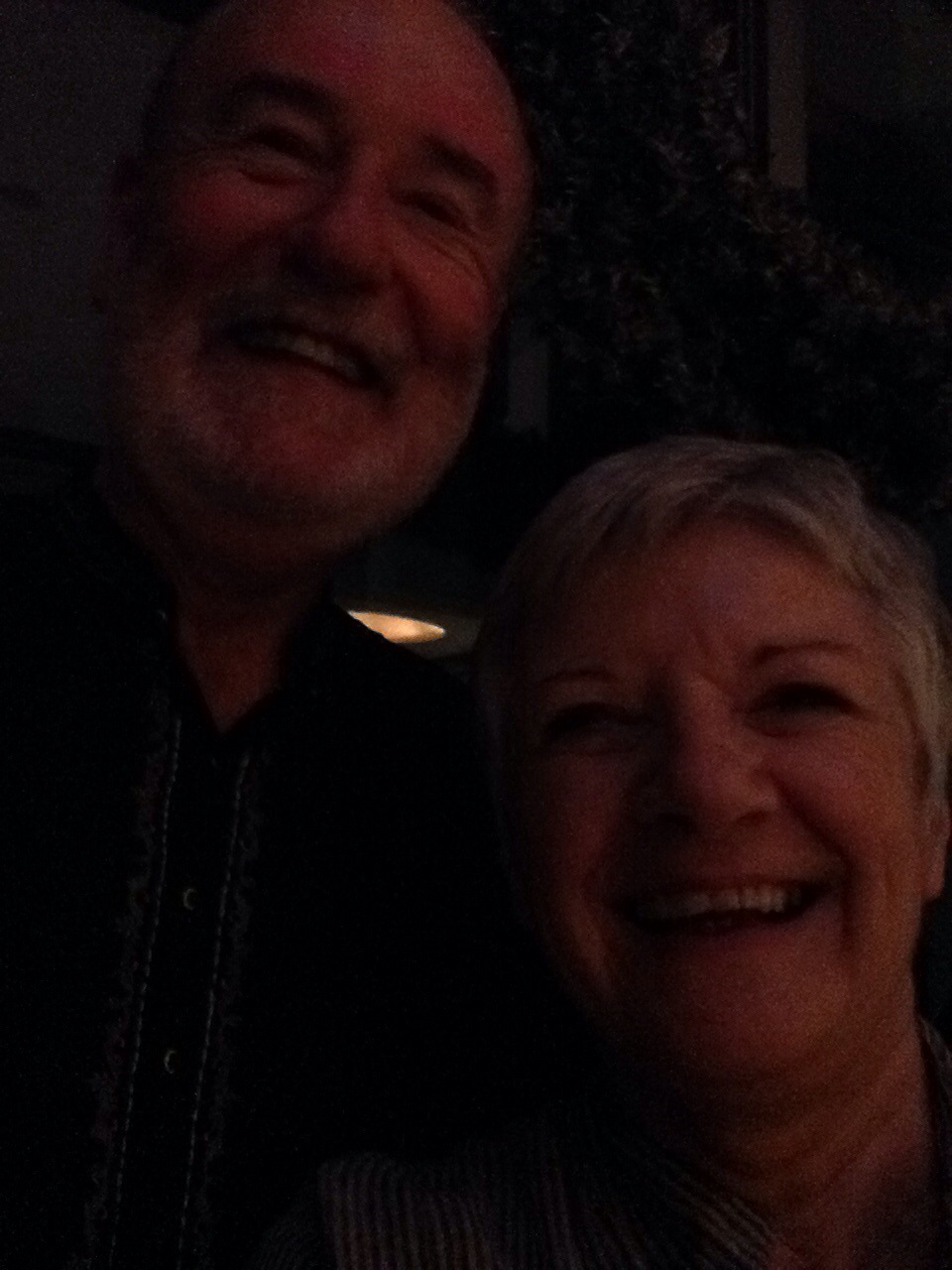 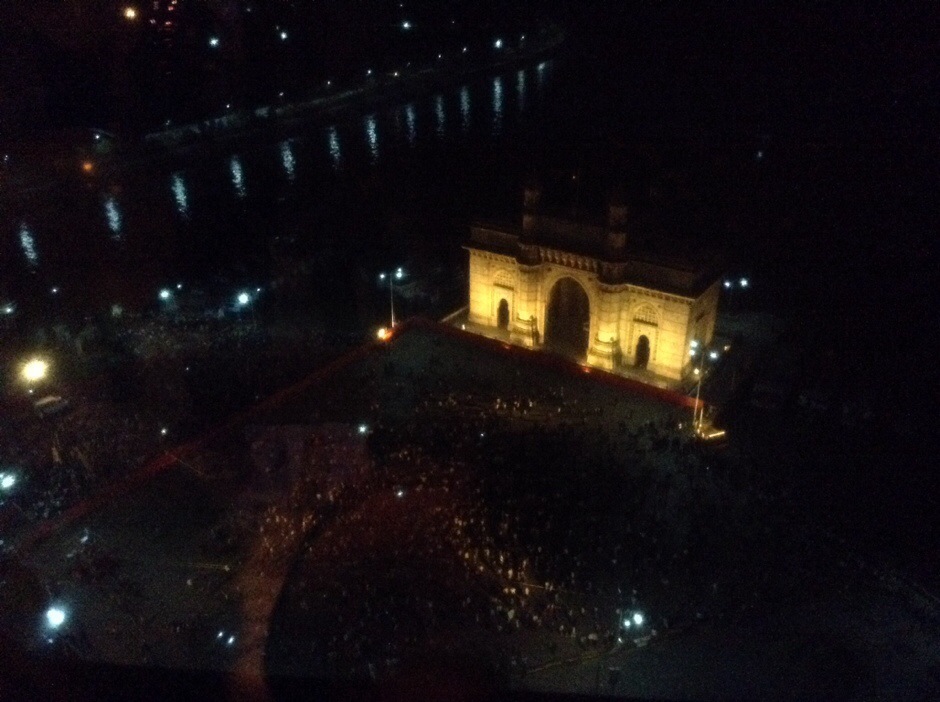 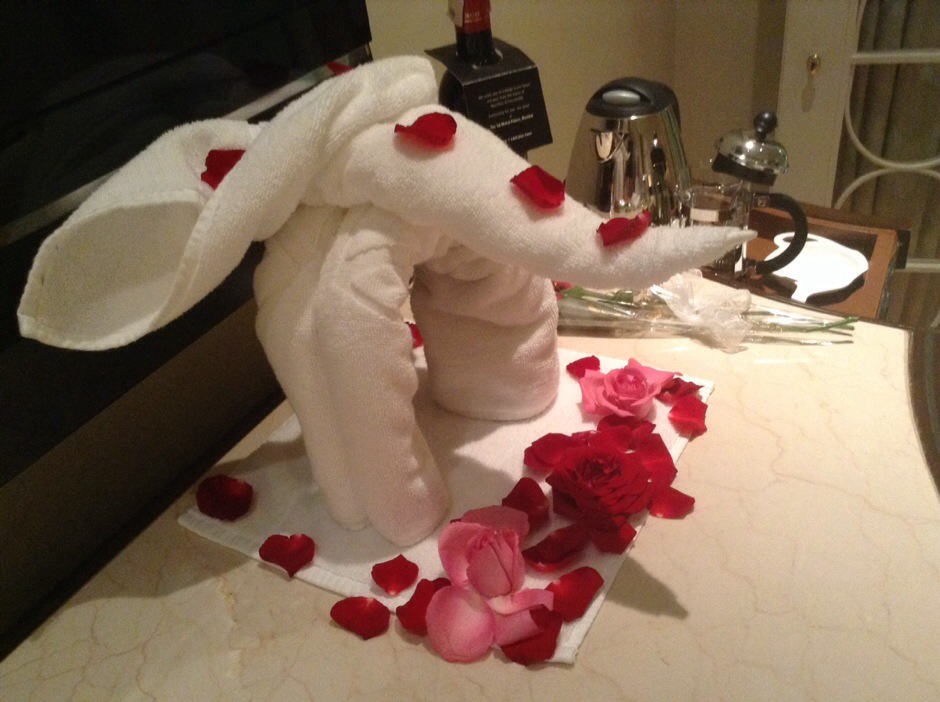 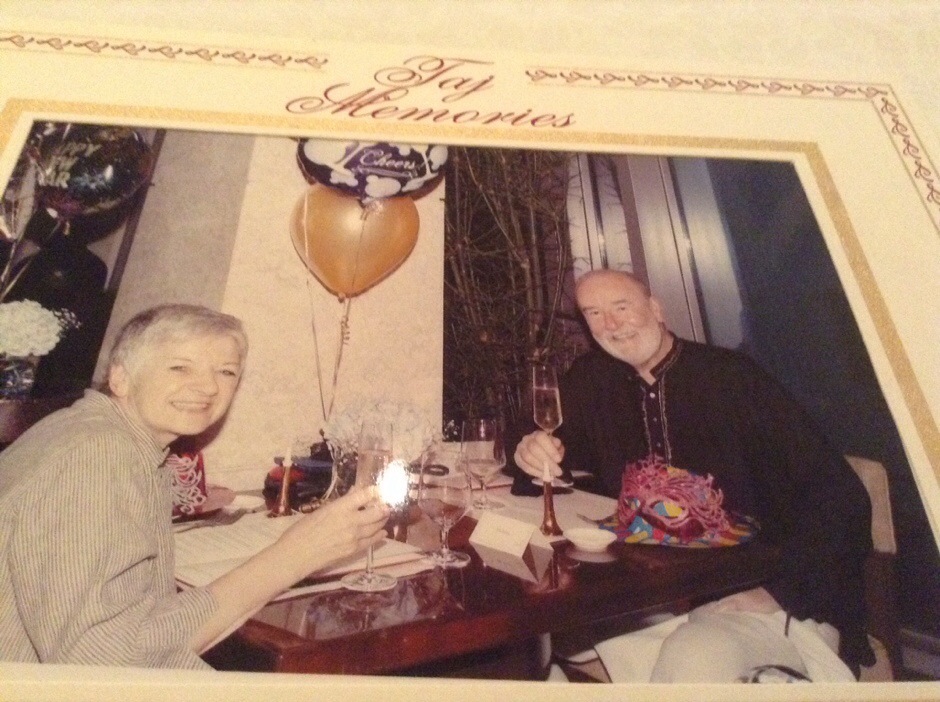 Well, what do we think so far?

Kerala was just as it says on the tin- quiet, undeveloped and beautiful. Except for the dawn & dusk calls to prayer from the mosques, & the party type singing & chanting from the Hindu temples ( & the roar of the surf ), it really was serene. The people at Neeleshwar were just lovely, gentle & sincere, & the whole concept is excellent. Don’t go for a riotous time, but do go for a complete wind down, yoga, cookery & Ayerverdic treatments! And the cruise on the backwaters – really a huge inlet from the Arabian Sea – was idyllic. It’s drawback? It doesn’t prepare you for India!!

The driving at first we thought was terrible, but just as in Sorrento last year, you start to see a pattern, and it’s not kamikaze! The noise is ridiculous, the constant movement remarkable, the margins for error less than 5cms, but it seems to work.

And it looks as though music is very similar the whole world over. The 4 piece band could have been straight from a ceilidh – a fiddle, a whistle/flute, a hand held drum ( can’t spell bodhran?), but no pipes! The sounds were different though.

And then Mumbai. Well, the hotel is one of the best that we’ve ever been to, except for 1 thing–it’s in Mumbai! We’ve been out this morning for a tour, & some of the architecture is stunning. Mostly from the British colonial days, but incorporating Arabic, Indian & Asian influences. The Victoria Terminal is a bigger version of St Pancras station, although not matching it’s current splendour, but even on a holiday, it’s just a seething mass of people. The juxtaposition of poverty with untold wealth is disturbing-we saw the worlds biggest “house” today, & we’re sorry that we forgot our Apples for photos, but it has 3 helipads, 600 servants etc etc & is 28 storeys high. It’s disgusting, and slap bang in the middle of a rundown area!
We’re going out again tomorrow to look around some more – the markets etc- & it is fascinating, but….

Tonight we’ll be on the top of the hotel for a NYE party, & I’ll pretend that I’m in Sydney. Only joking!

It’s just so hard to describe it accurately.

It’s evident just how much the Indians love their cricket though – never seen so much cricket being played all the time, in lovely whites, with formal umpires etc. I’m playing the old fast bowler card a lot, bit like rugby and the chasse at home!

We’ll put some pictures up as and when, but they don’t really capture it all. 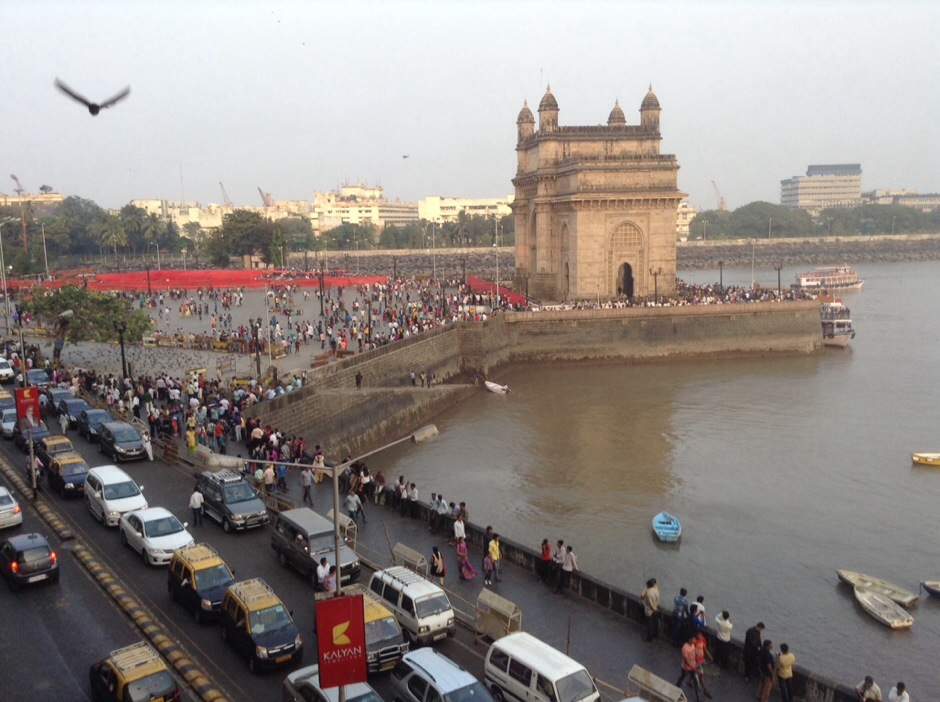 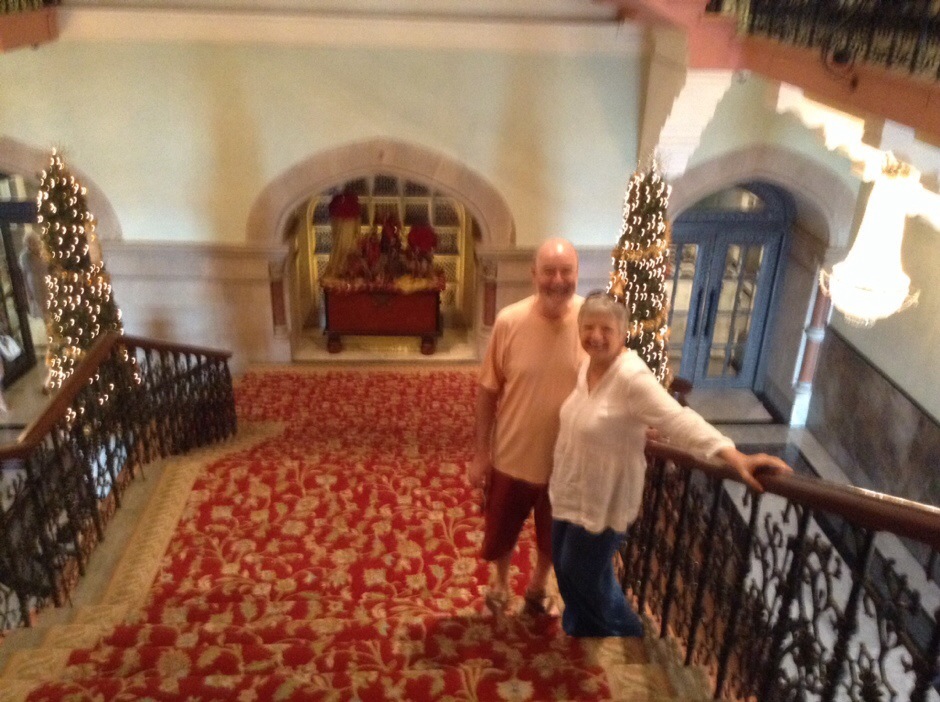 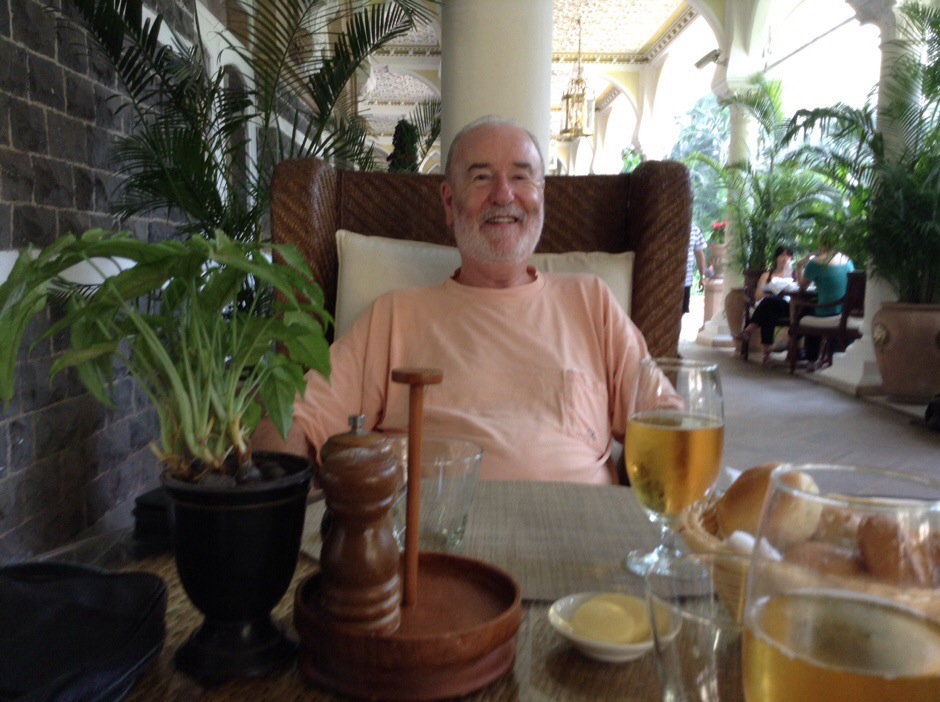 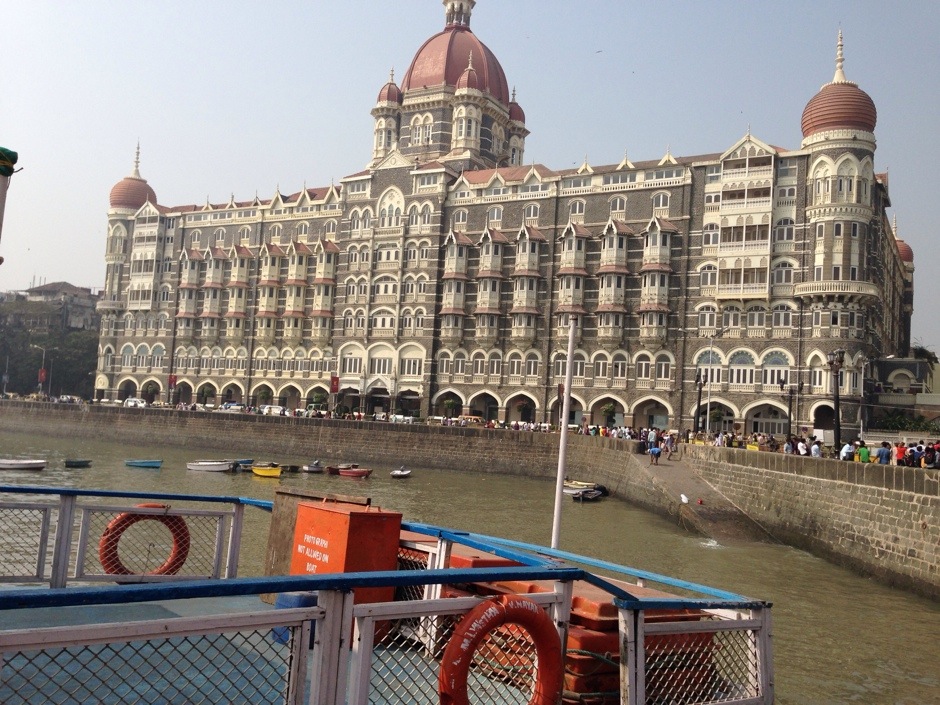 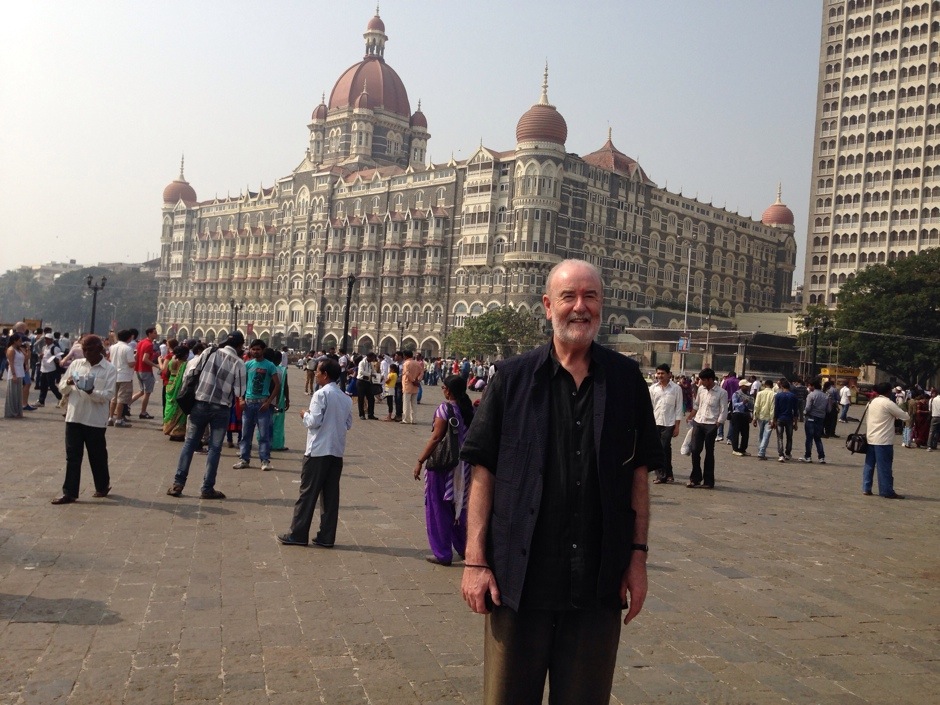 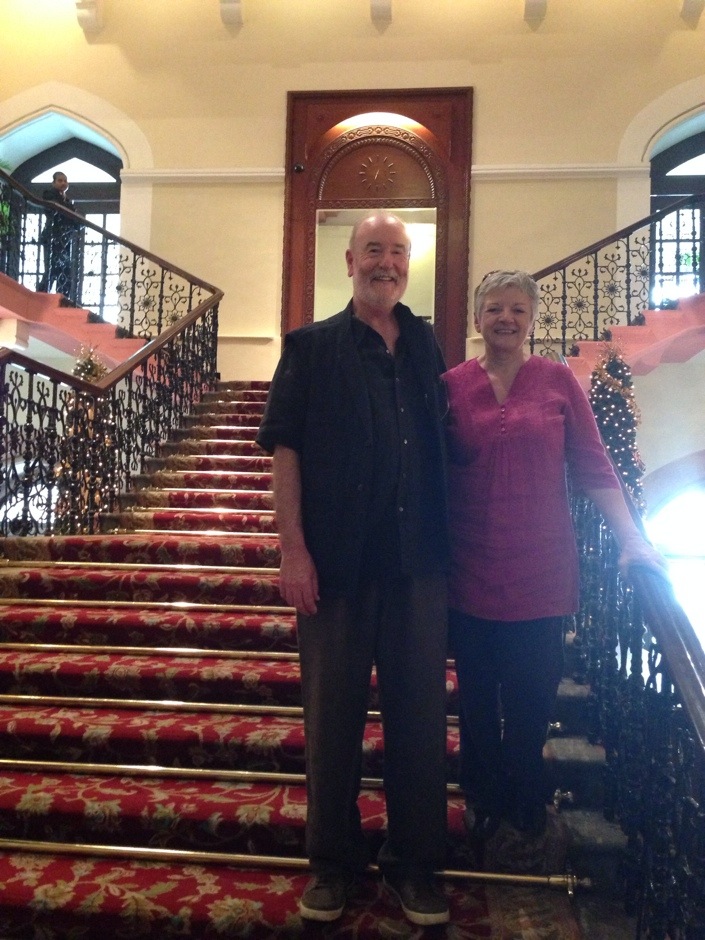 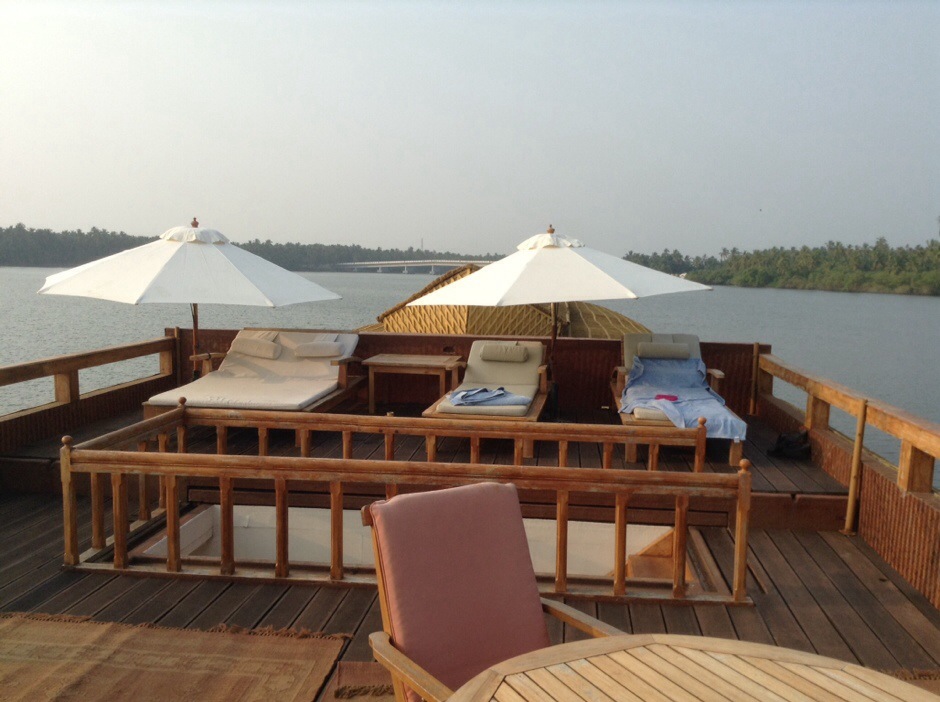 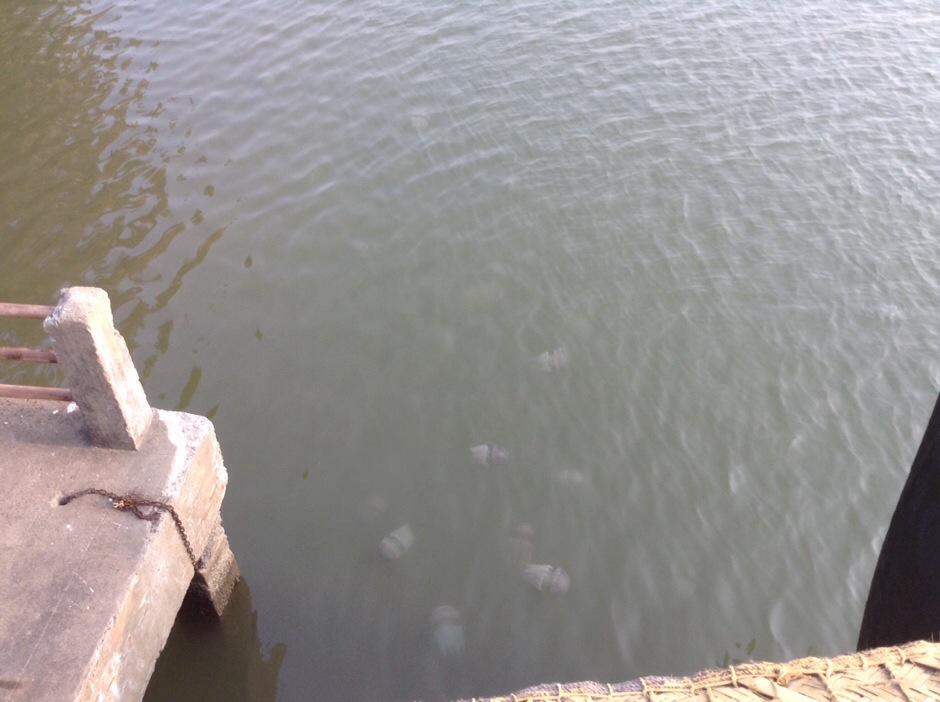 We left the resort on Sunday just before lunch. On our way we were taken to a Hindu festival for blessing of a new house belonging to one of the chefs. I think the manager thought we should see something local other than a luggage shop! The ceremony that we saw was carried out by a Holy man & is usually only seen in the Temple. It is called a Tayyum ceremony & involved the Holy man spending a lot of time decorating his body with different colours before dressing In quite an elaborate costume. His headdress was made up of flowers & he wore bangles around his ankles & wrists. He blessed the house & the owners etc—all quite symbolic & easy to follow. We didn’t have a camera with us so missed out on some great photo shots. This ceremony is only seen in Kerala so it was quite a unique occasion.
From there we went to the House boat——a huge converted rice barge beautifully styled following the theme of the Retreat. There are 2 bedrooms but we were the only guests aboard & had 4 crew to look after us. We began our cruise on the Backwaters straight away & we started off with a lovely lunch. I had imagined the Backwaters to be a bit canal like but in fact they are a huge expanse of navigable water south of where we had been. We went to Monkey Island where we were able to feed some monkeys near a Temple. I wasn’t that keen on doing this but the crew assured me that the monkeys were well behaved & this proved to be the case. They were really only interested in the fruit that the Chef had taken for them. When we got back to the boat the water was swimming in Jelly fish—-some of which I did manage to photo. We then whiled away the rest of the afternoon on the sun deck being objects of friendly curiosity to the local fishermen & ferry travellers. Just before dusk we made a further stop & went to see a Hindu Temple where during festival time thousands of people arrive ( a bit like Vaour during August ) & receive free food & shelter. We were the only visitors this time along with our guide Sajith from the boat. The local children were very curious & wanted to try out their language skills on us. As we left the Temple they waylaid us with gifts of petals & one girl gave me a note with a drawing of a Xmas tree & all their names listed.
We left them on shore & moored up for the night in the middle of the water. Chef prepared & served a beautiful four course meal which we ate by candle light on the sun deck before eventually turning in.
The next morning after a lovely breakfast we headed back to our starting point & the car came to take us to the airport. 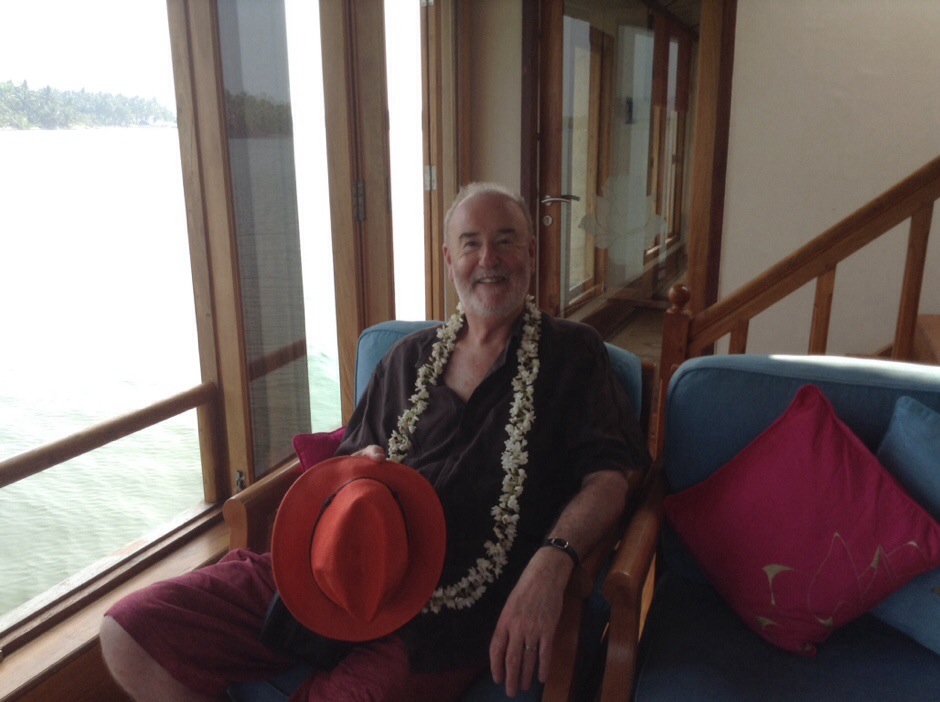 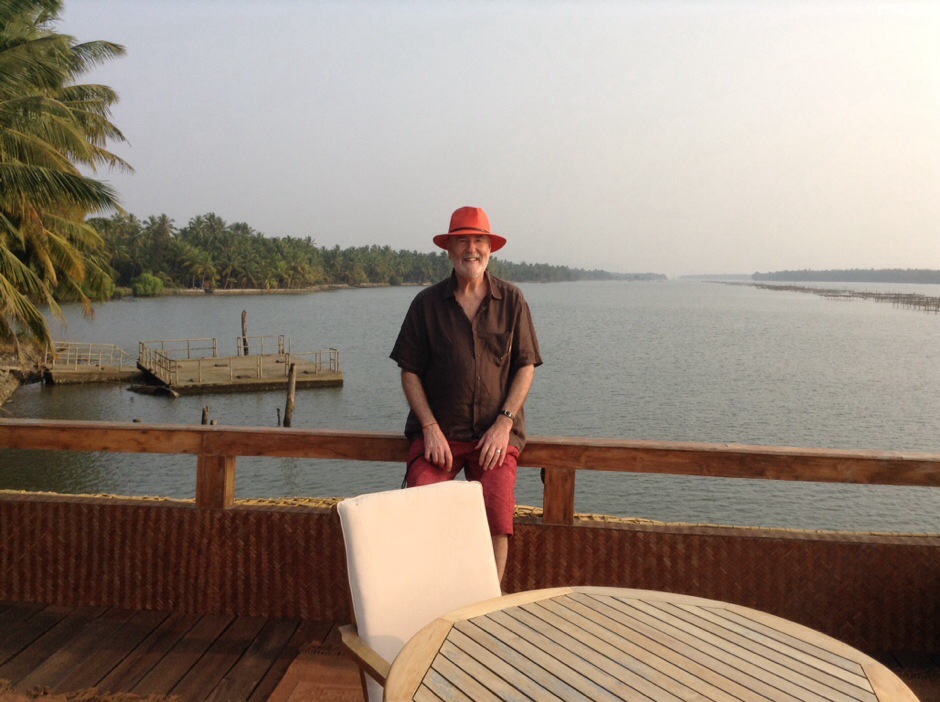 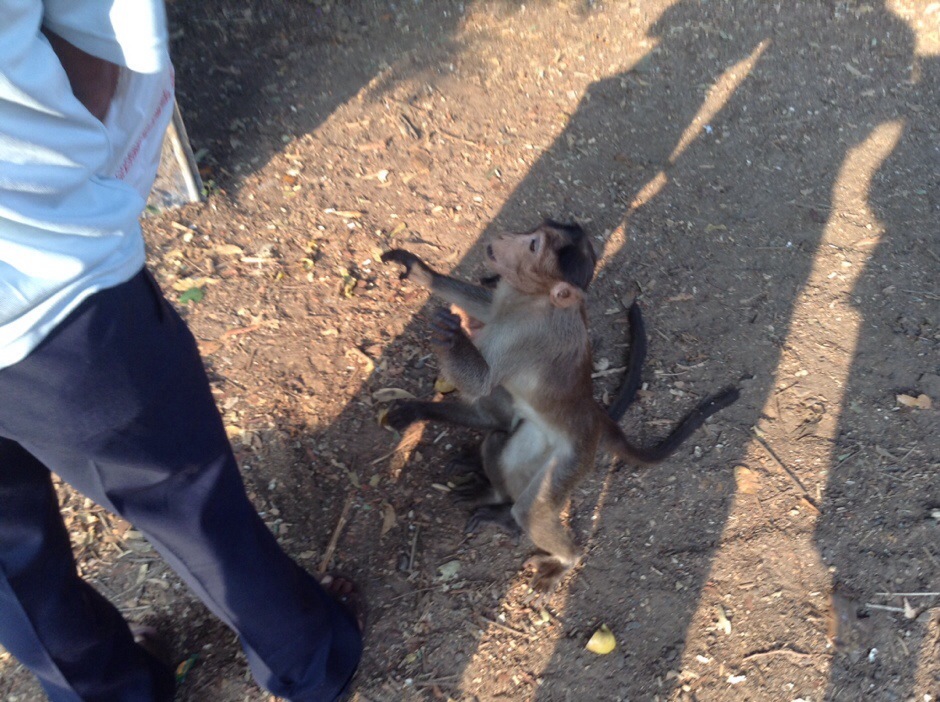 Having spent a week chilling out on our terrace, I decided that it was time to do something different. And so I hung out in a hammock, and what a different perspective you get. 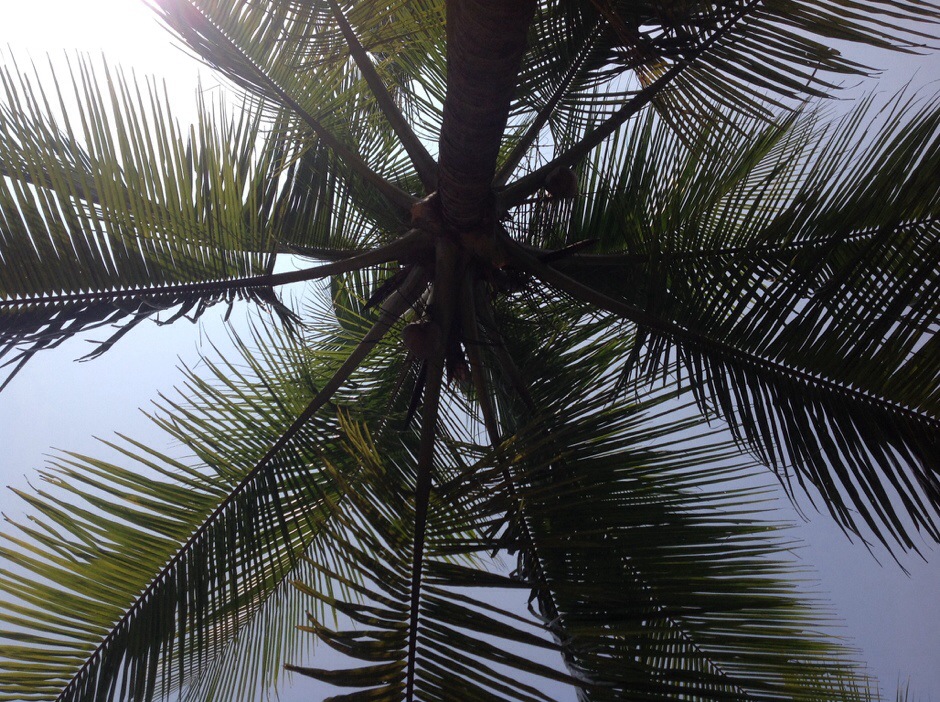 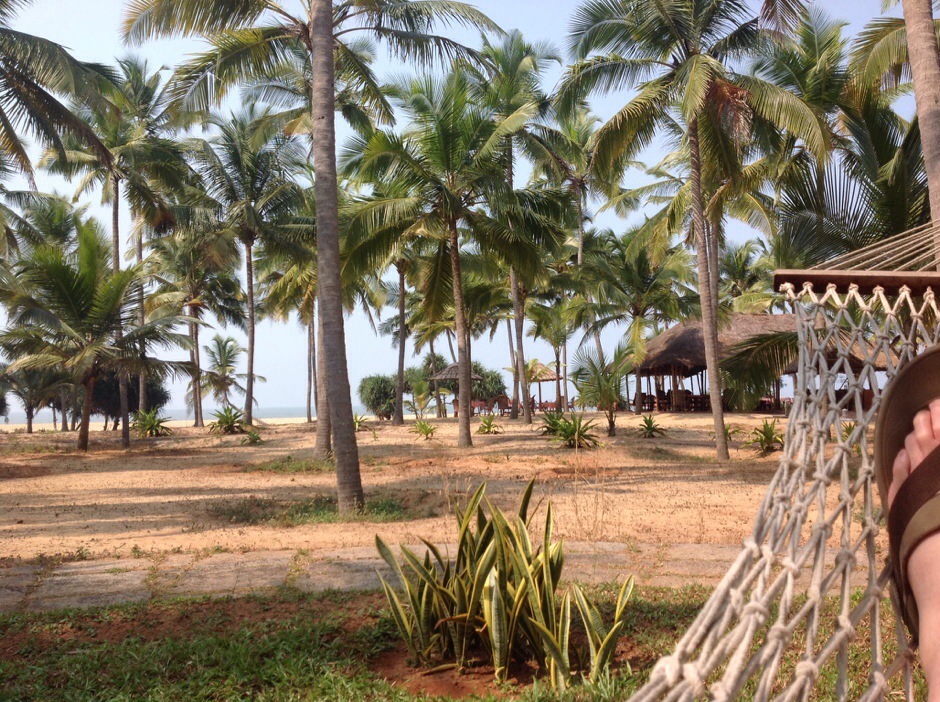 And I went in the sea, but not for long. Much warmer than Scarborough, but the waves and the back pull were too strong for my swimming style ( using the word ” style” very loosely )
It’s been a lovely rest, but we ‘re looking forward to seeing Mumbai, and then a lot more of India.
Tomorrow we’ll be on the boat, and will resume normal service in a couple of days. 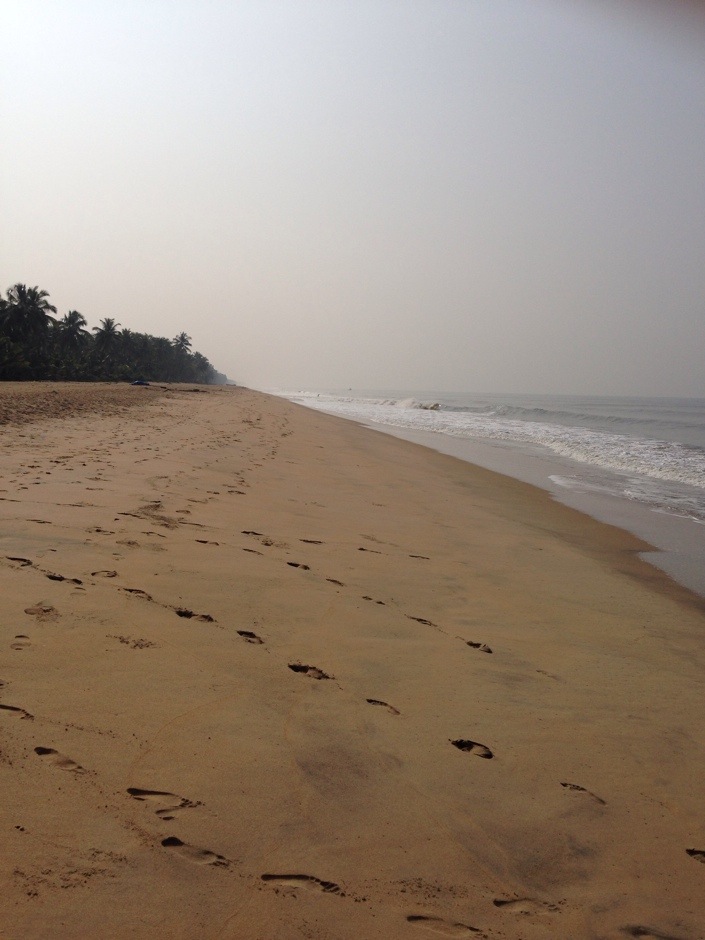 This is our last full day here in the Retreat. We have walked around taking lots of photos so we will have something to remember it by—along with the delicious food, relaxing treatments & general peace & tranquility.
This morning I went for a long swim instead of yoga & had the pool entirely to myself. 25 lengths later I was ready for breakfast!
Doug ventured into the sea yesterday–revelling in the breakers & benefiting from another kind of massage. He has his last treatment today & I am going to indulge in a manicure & pedicure. The tailor is working furiously to finish our order, he has promised that all will be done by 7h30 tonight. I suspect he doesn’t get much sleep.
Our laundry came back perfectly washed & pressed & today I will have to start packing.
Tomorrow we move onto the boat to explore the backwaters. & we will sleep there too, we are really looking forward to that adventure. 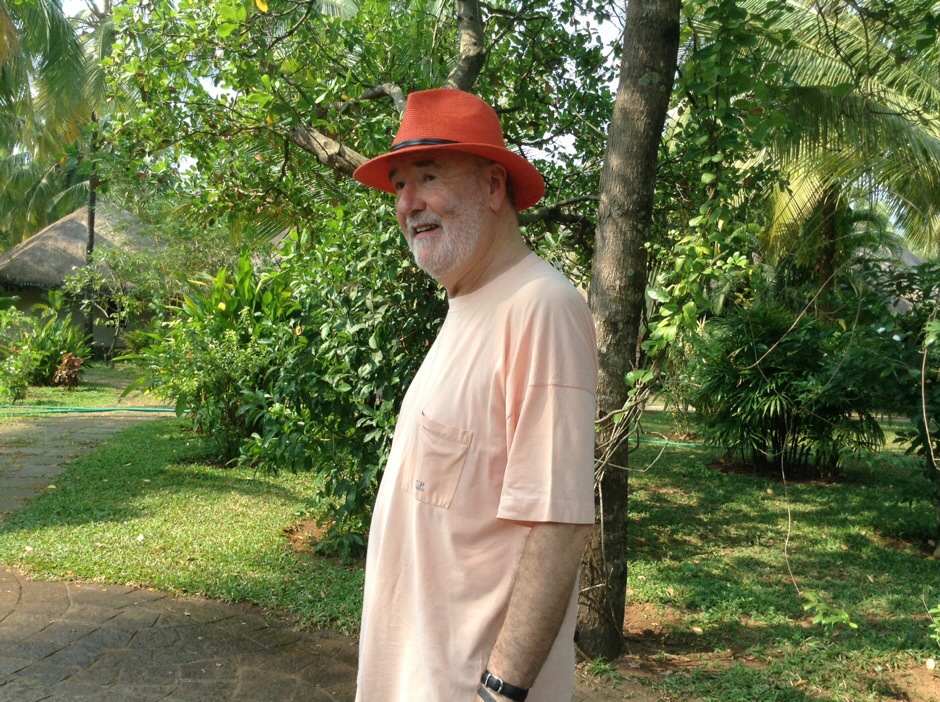 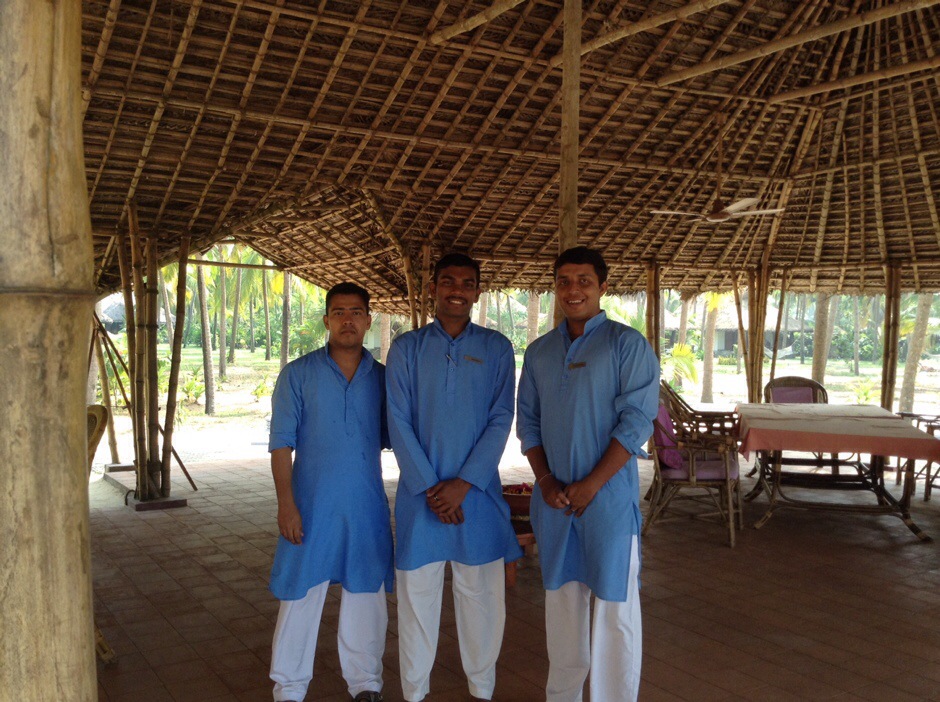 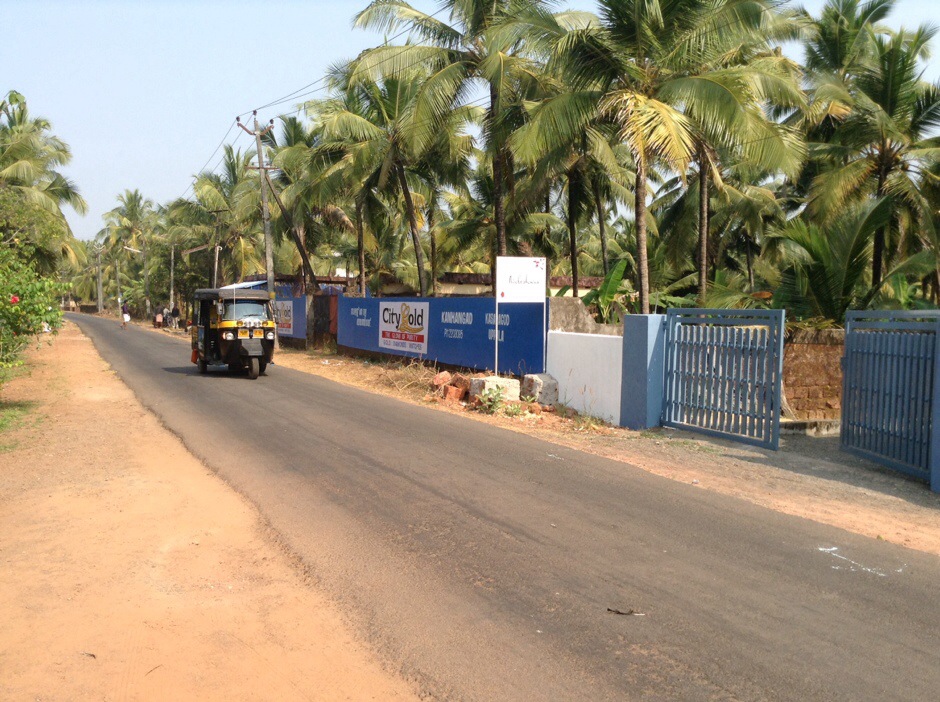 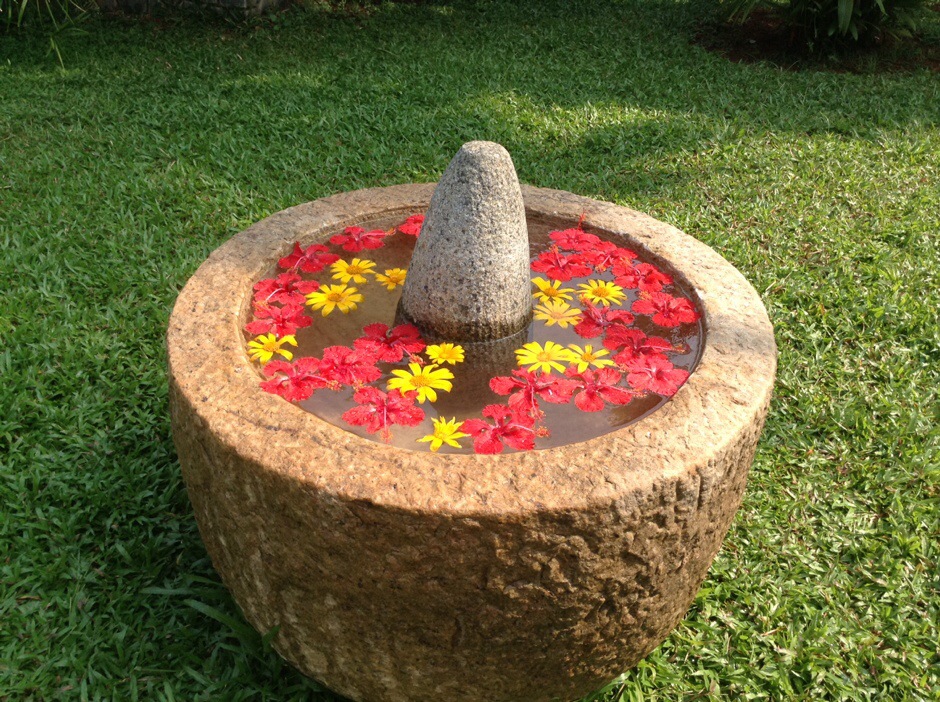