We’ve been having a bit of wifi trouble but at the moment it is working again. When we saw the telecoms network poles etc. yesterday, it is really surprising that it works at all. Here we are though, another perfect day. I have been to yoga & Doug is currently having another treatment. He will be back soon & then we will totter off for lunch facing the sea. We intend to walk along the beach at sometime but will probably wait until it is a bit cooler.
Doug has an appointment to collect his shorts from the tailor later this afternoon, my dress should be ready tomorrow. I am currently waiting for the return of our first batch of things that we sent to the laundry. I’m hoping that they come back intact.
Lunch beckons!

When we’ve been away for Christmas before, even in non Christian countries, you’ve always known that it was Christmas. Not here. We hear the sound of the call to prayer at the mosque, and the singing from the Hindu temples every day, & I thought that I heard hymns on Christmas Day, from a church. But Kerala, or at least this part, is clearly 50/50 Hindu & Muslim. Apparently Kerala has a democratically elected communist government– now there’s an oxymoron!

We decided to go and buy our replacement bag today, and the Hermitage organised a car and driver for us. When we arrived in shorts, it was suggested that Lou went and covered up!! Below knee length shorts were not recommended, and we could see why when we went out. We were surprised at the numbers of women completely covered up in black. The Hindus were welcoming, but the glares from the others was surprising. We saw a similar thing in Malaysia– the creeping “arabisation” of Muslims.

Nevertheless, a successful trip, and very interesting. The replacement bag was £11. When we arrived, we were astonished at the driving. On a scale of 1 to 10, with say British drivers at 9, India would be at 2 and French drivers now at 7!! Until we came here we thought that the French were terrible!
We’ve seen the light! Although we are now beginning to see some of the unwritten rules. The horn–1 toot means I’m here, 2 means I’m passing, 3– well? The cars seem to be so underpowered that no-one is going too fast, the phut- phuts are beautiful and everywhere and the roads so bad that again it’s all very slow.

With shorts frowned upon, Lou’s having the tailor here knock up another dress, as you do. At these prices, I understand why.

Amazingly, so far Lou hasn’t hijacked the yoga classes, but it won’t be long now I suspect. And perhaps a cookery class, because time is slipping by! Otherwise it’s just such a perfect climate– warm, balmy days and evenings, with dinner on the beach every night. We’ll see the difference when we move on I guess, as we move northwards. 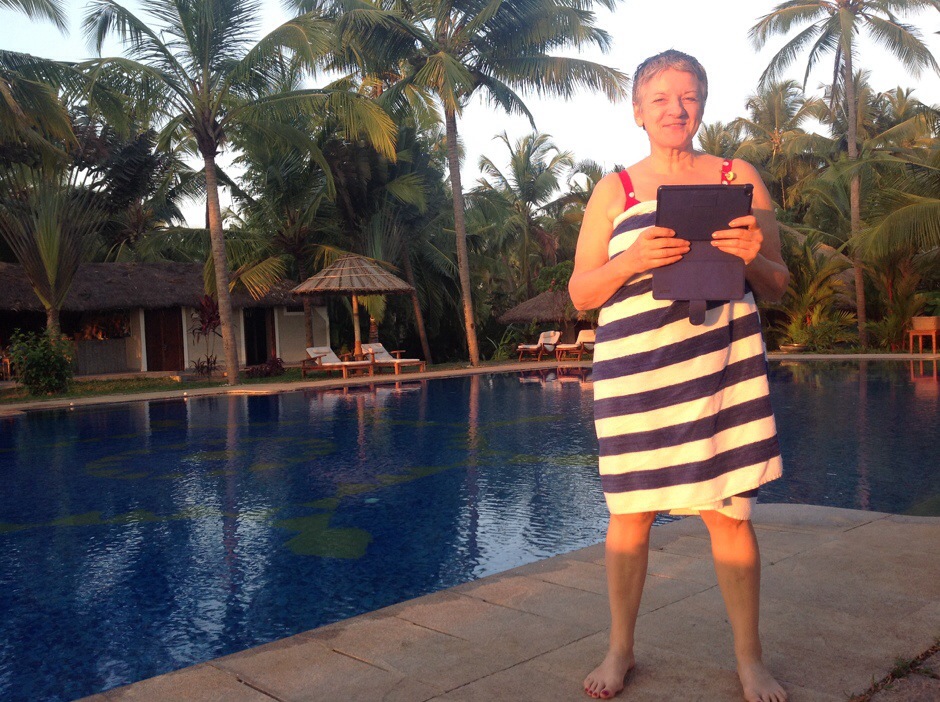 We had a lovely day yesterday, in fact hard to believe it was Xmas. Not a bit of tinsel, turkey or carol anywhere. I had a fabulous treatment which finished with a slow flow of oil onto my forehead. It was soooo soothing & relaxing—the rest of the day seemed to pass in a blur.
Doug now has a new shirt that the tailor has run up for him. It is a perfect copy of one of Doug’s oldest but much loved shirts. A wonderful job at a very reasonable price. The tailor is currently working on some shorts which will be ready tomorrow.
We are going out this afternoon to buy a replacement bag–here’s hoping.
The photo is of Doug in restful pose! 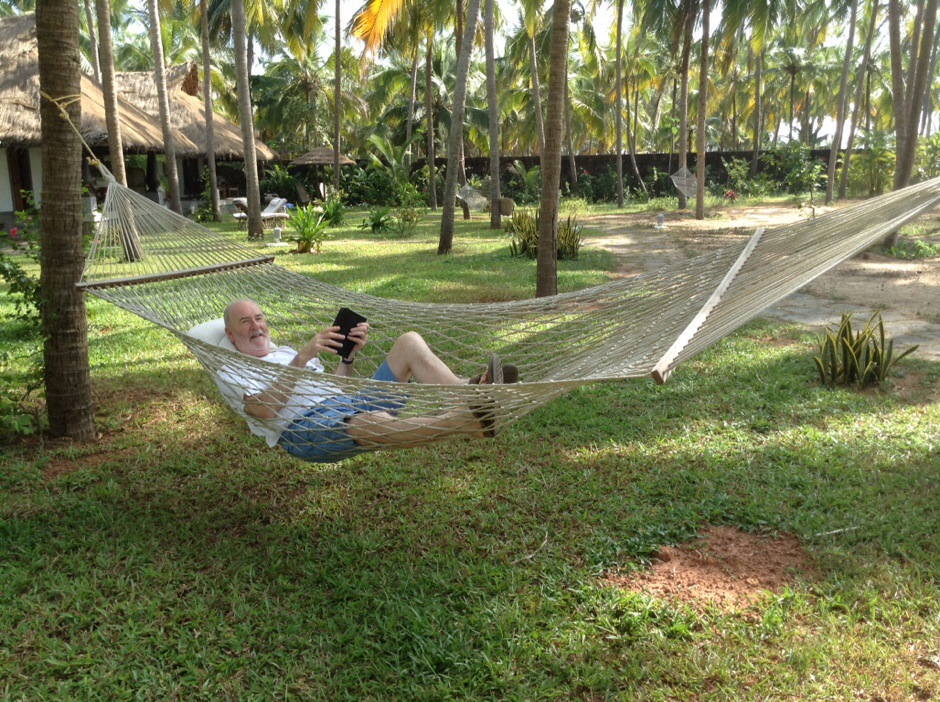 Christmas greetings to one & all. We had a fabulous night with dinner on the beach. The meal was scrummy & we had music provided by local musicians. It is the first time we have seen a fiddle player sitting cross legged on the floor holding the fiddle with his toes!
We were though saddened to hear that Gill’s Mum has died—she was a sparky & brave lady & we will miss her & her love of life. However we did smile last night when a shooting star passed overhead & we both thought that it was Eddy saying goodbye.

I have breakfasted alone this morning, Doug not eager to quit his bed but no doubt he will rouse himself in time for his next treatment at midday. Another peaceful day ahead. 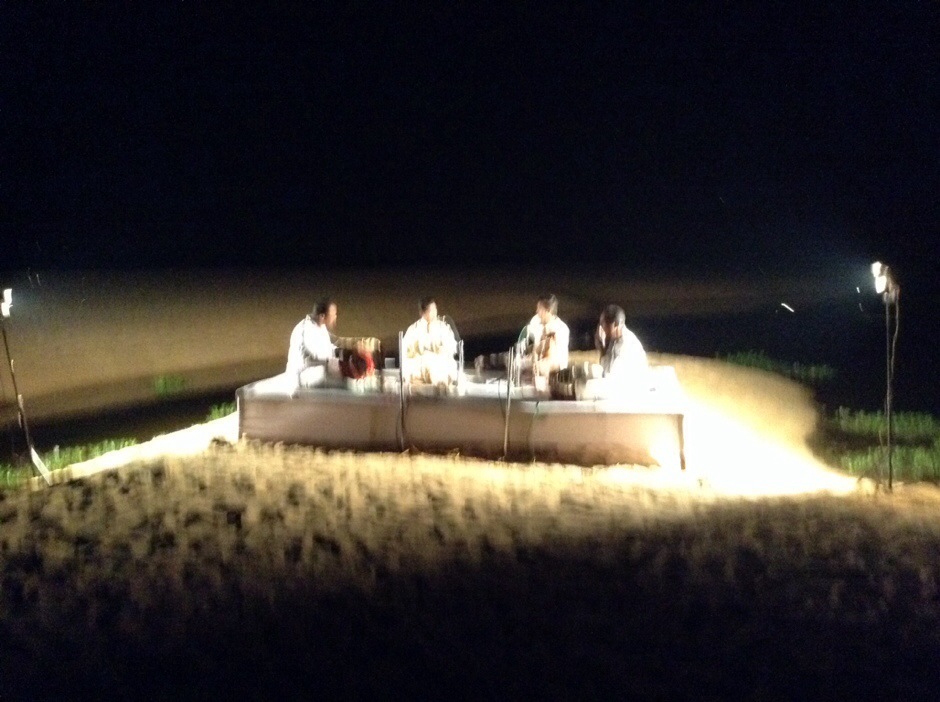 Another glorious day here in paradise. Another yoga session this morning with the sound of the sea lapping nearby. We have had our Xmas eve menu delivered this morning & I thought that you might like to see it. Until tonight we will pass the day with more treatments, swimming, discussing tailoring requirements & generally chilling out. Till later. 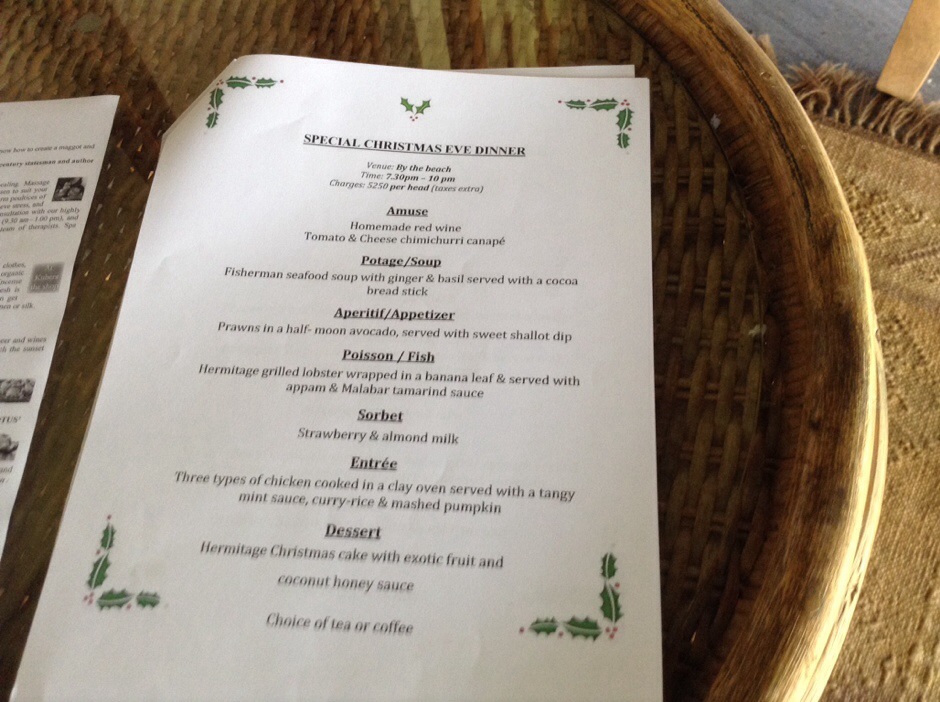