Today is Memorial Day—- a national holiday. A lot of places are closed even restaurants. We went out after breakfast to see the one Museum dedicated to the Native American Indian & guess what, it was shut. We did, however, find a supermarket open & we were able to replenish our supply of sparkling mineral water. It was one of the few shops that we had been in that actually had fresh products like fruit, vegetables & meat!

We managed then to find the one road that got us down to the riverside & what was probably one of the oldest parts of town. A bit of light refreshment & then we came back to settle in for a lazy afternoon on the porch in the shade. Incidentally Jerry Lee Lewis played in a bar on this waterfront when he was only 15yrs old. He originates from these parts.

I’m going to post some photos of the main house & grounds. There are 26 acres here. This whole area is well known for the number of houses that survived the Civil War. Apparently the area was predominantly French at the time & they decided not to oppose the invading forces, consequently the houses remained intact.

We had booked the restaurant for 8pm but went a little earlier to have an apéro. Again, we ended up chatting to an American couple from Atlanta, who had at least been out of America—they did Europe last year!  They were from Atlanta & were very interesting & she was called Louise, he was John & their surname was Thomas. I’m not kidding!

We had a lovely meal in the restaurant with a very jolly but efficient waitress, who earned her tip tonight. Although we had no concept of being rushed, here we are back in our room & it is not yet 10pm. There was a huge storm whilst we were eating, so I am hoping that the front had passed through & tomorrow will be fine again. 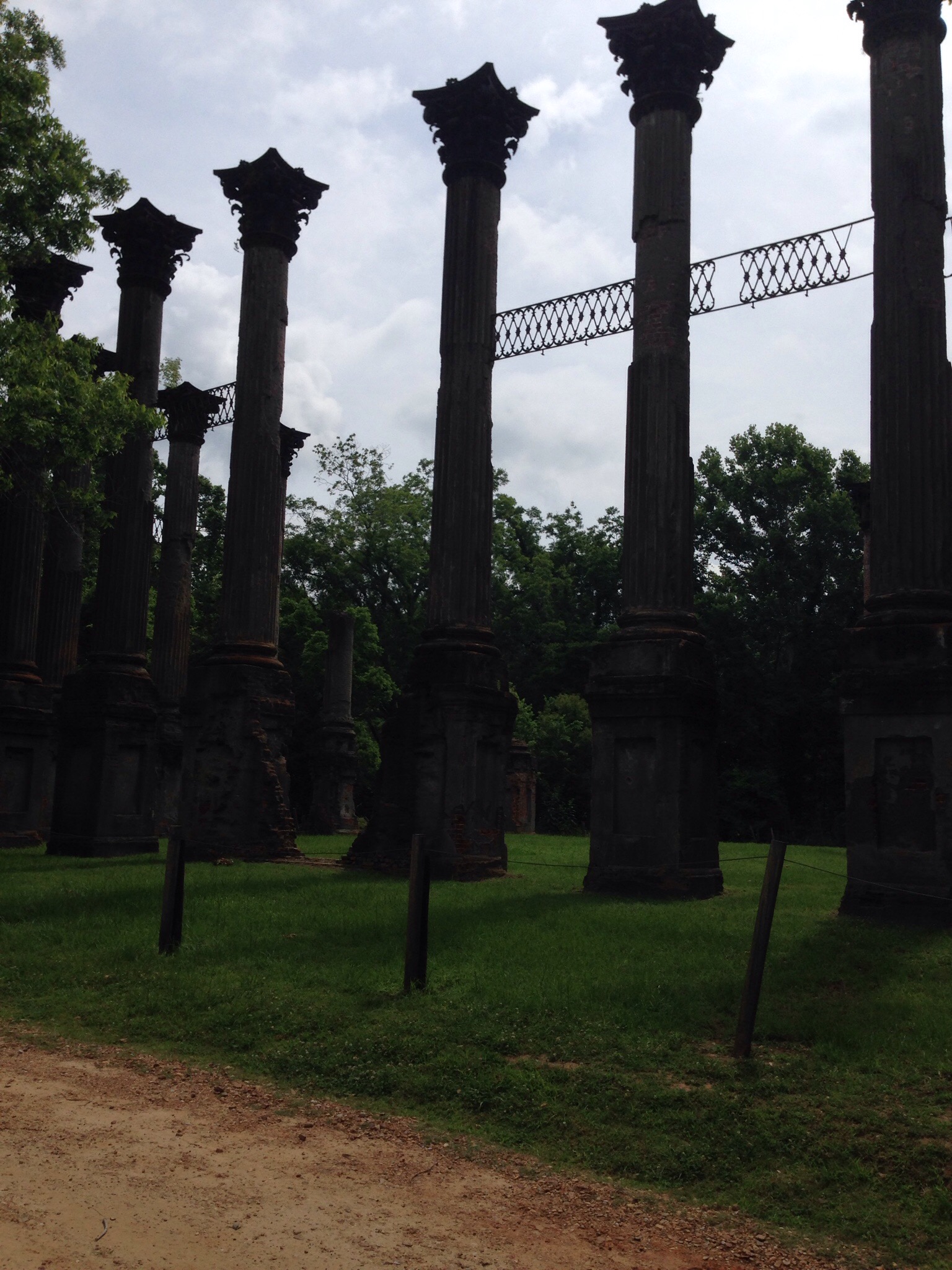 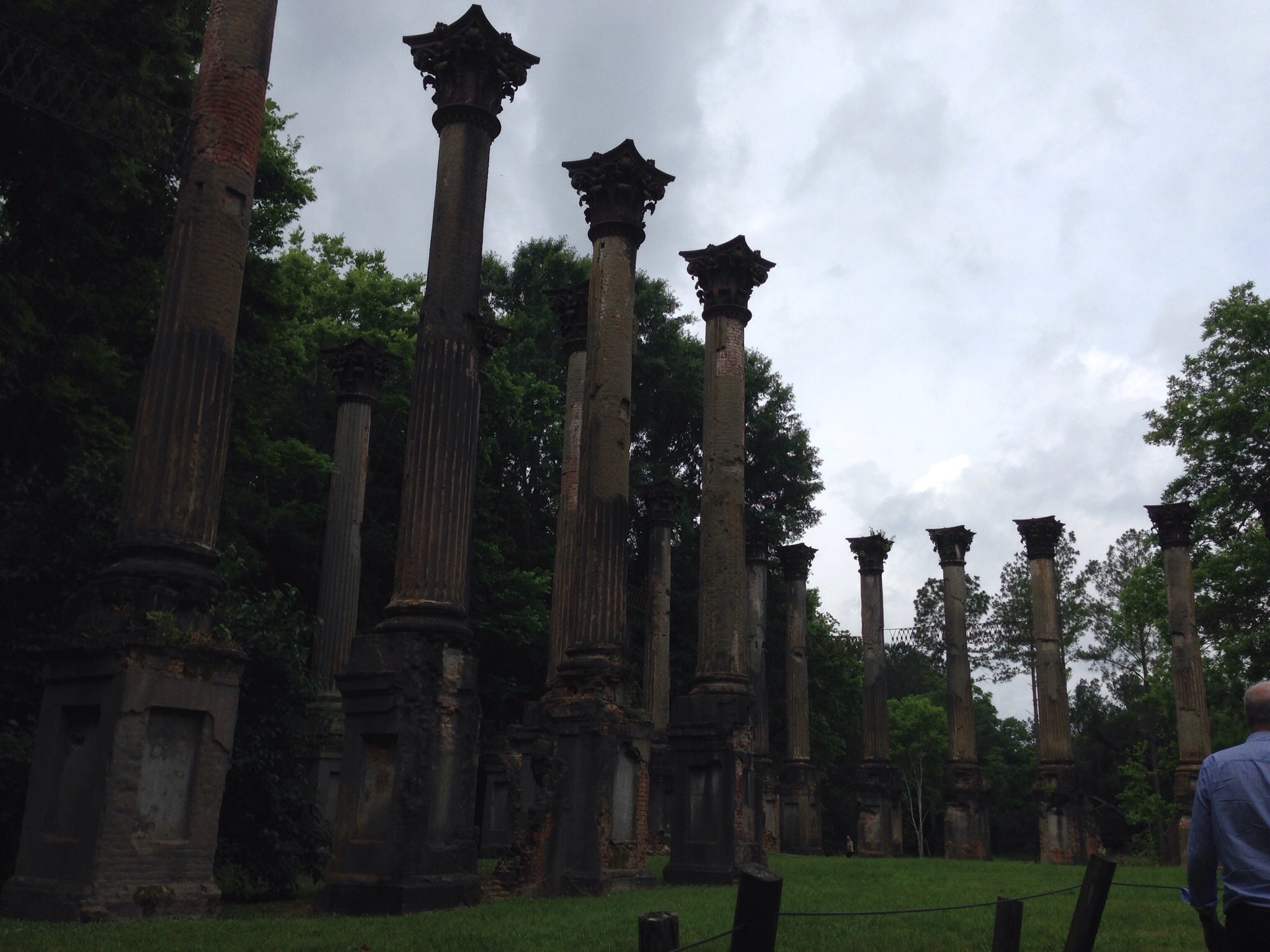 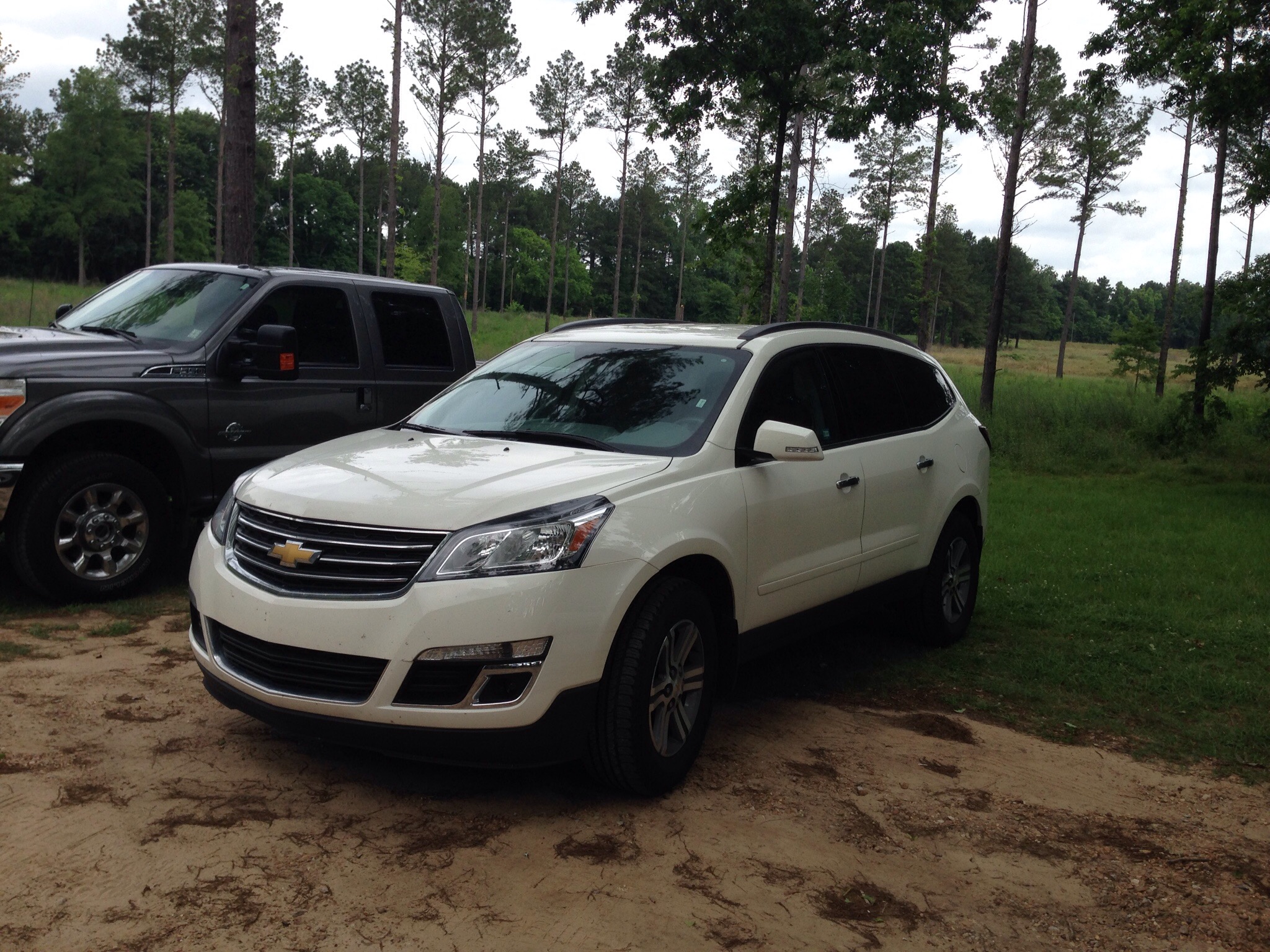 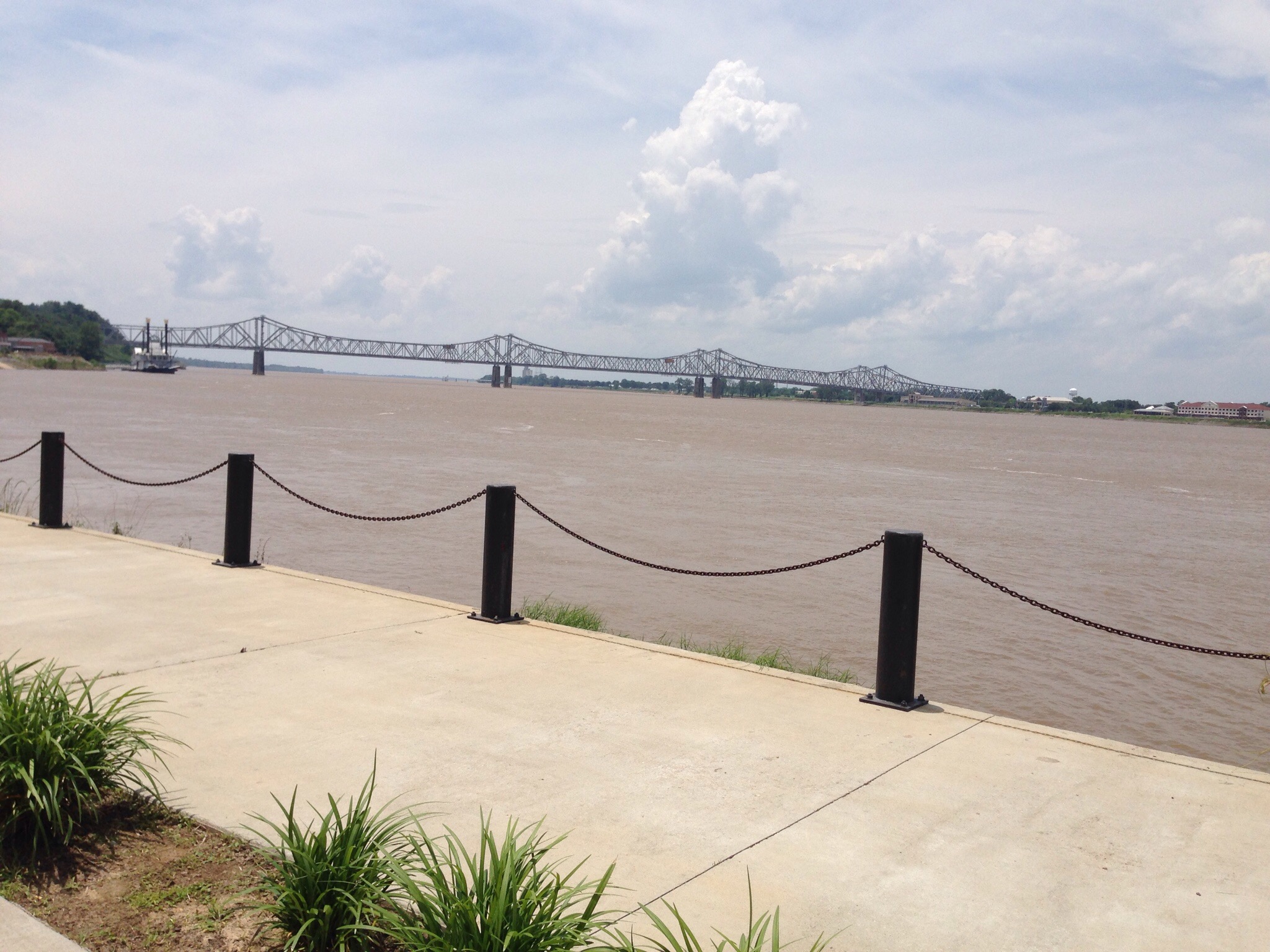 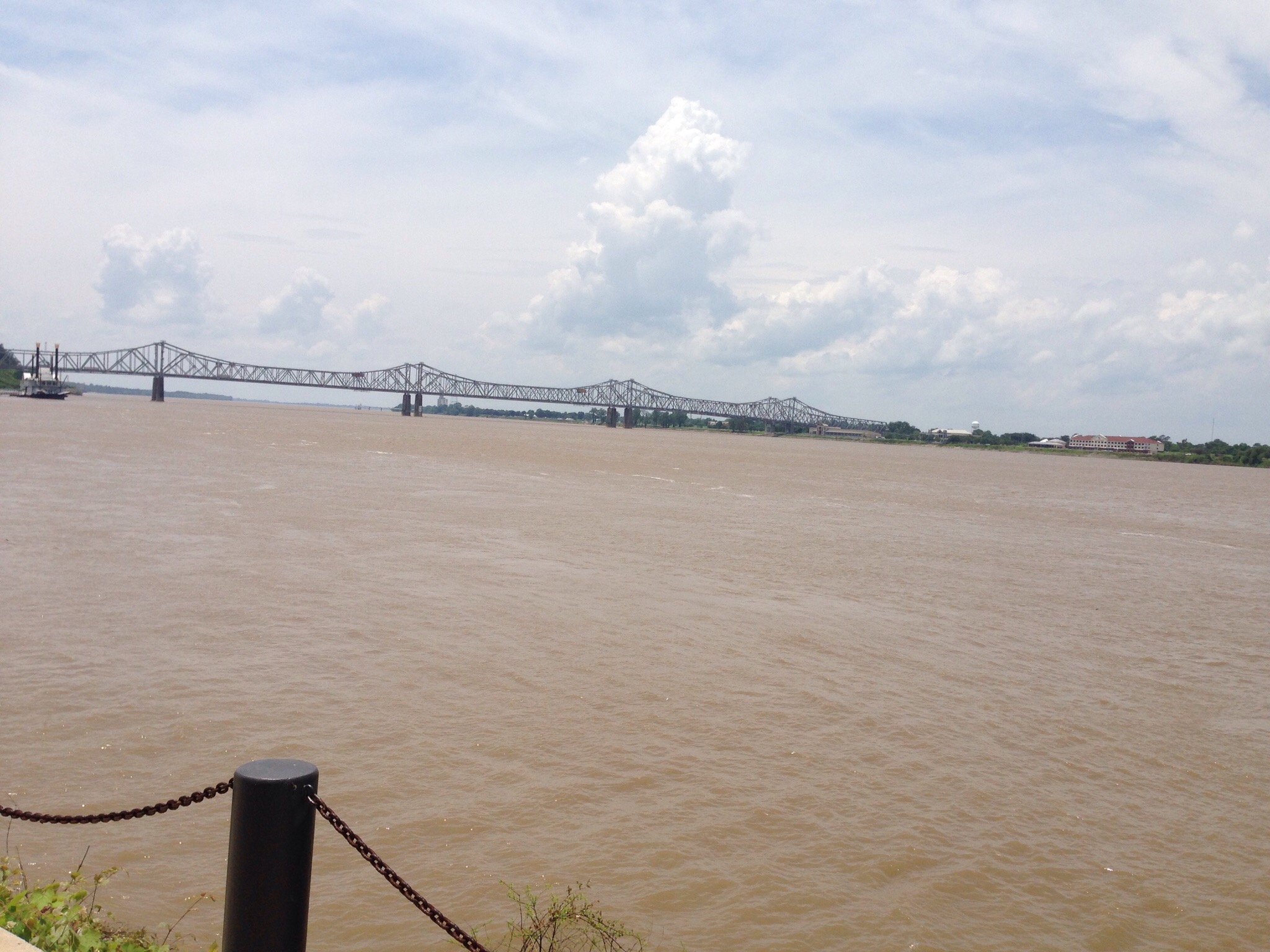 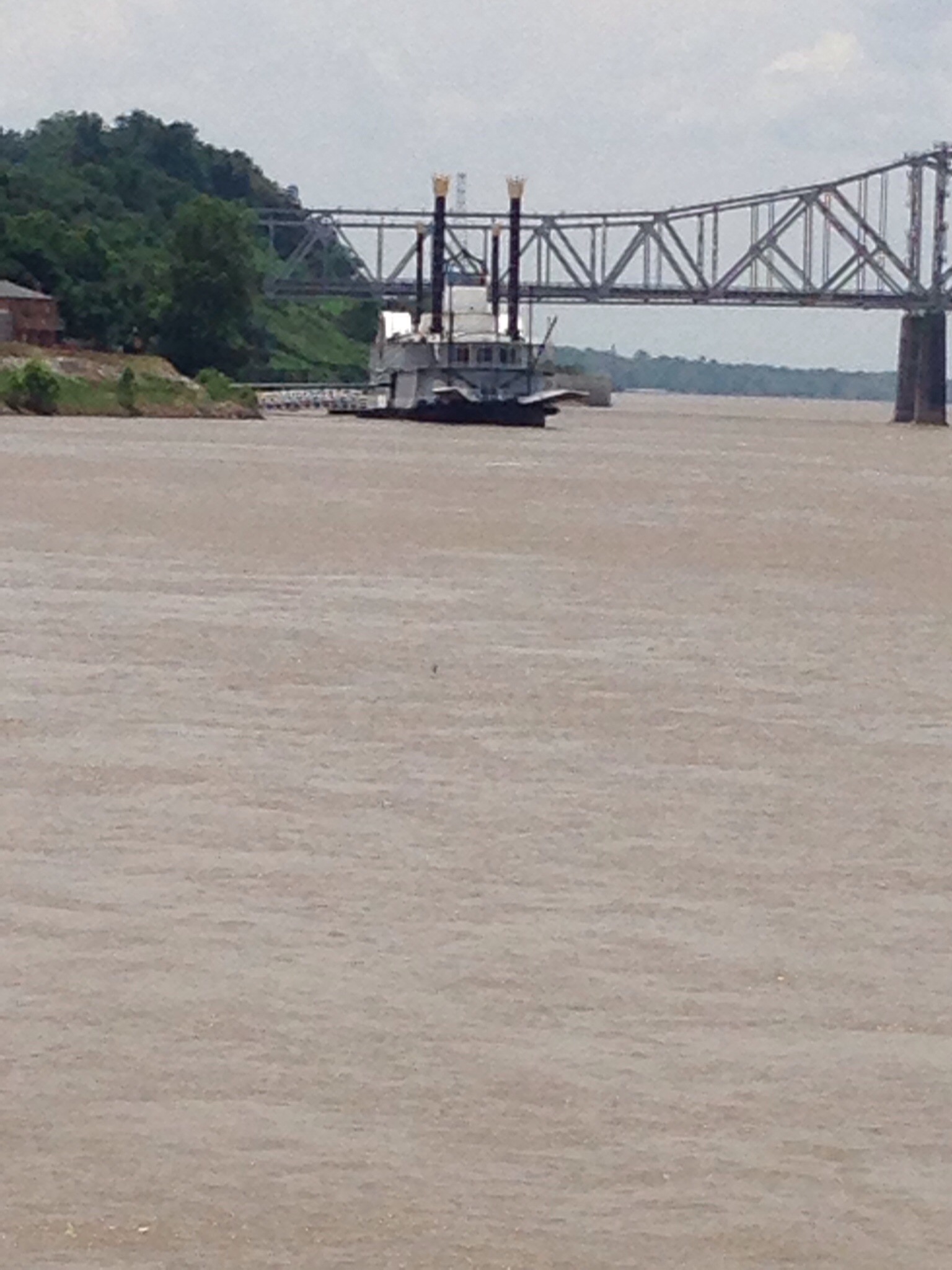 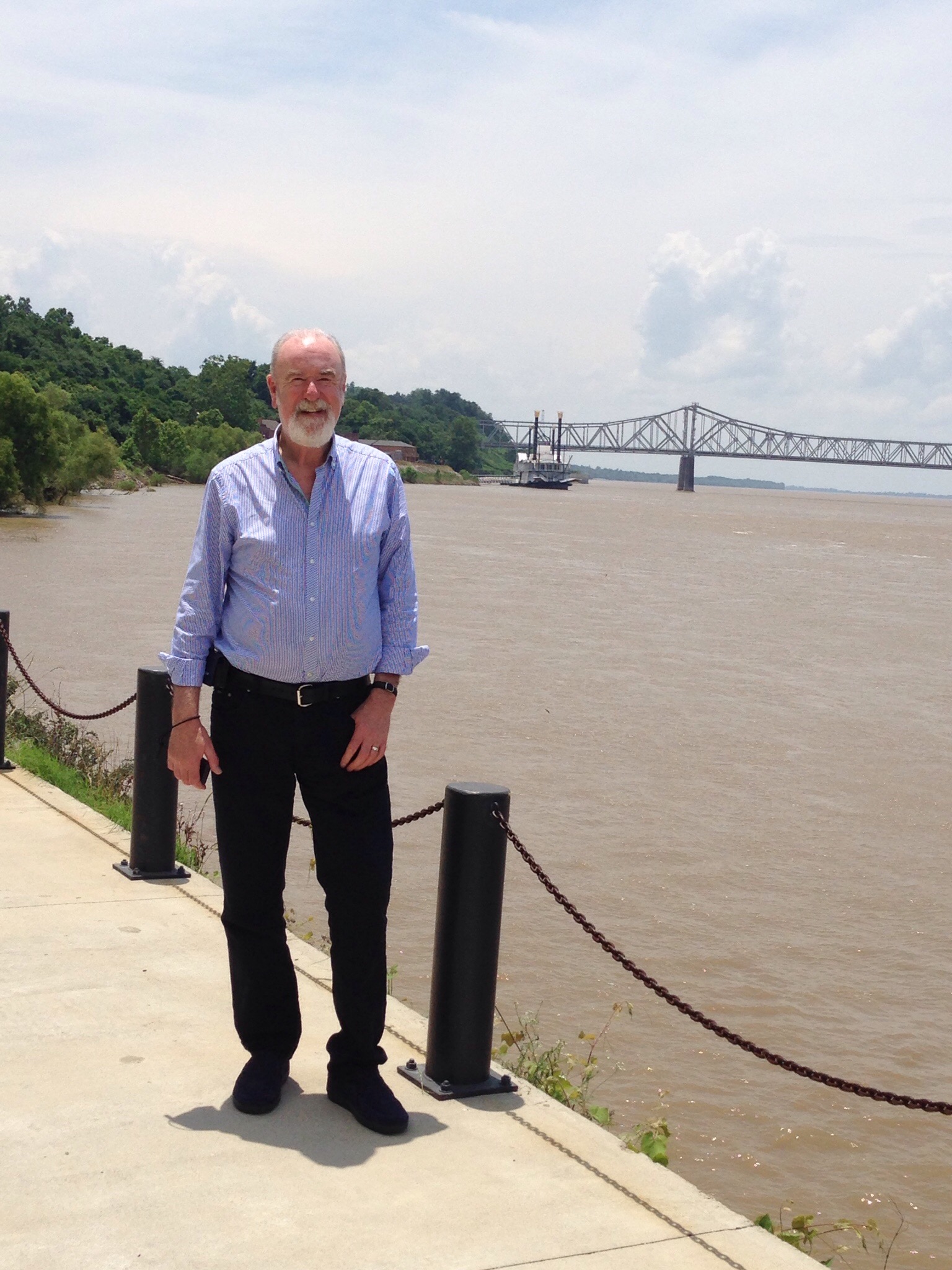 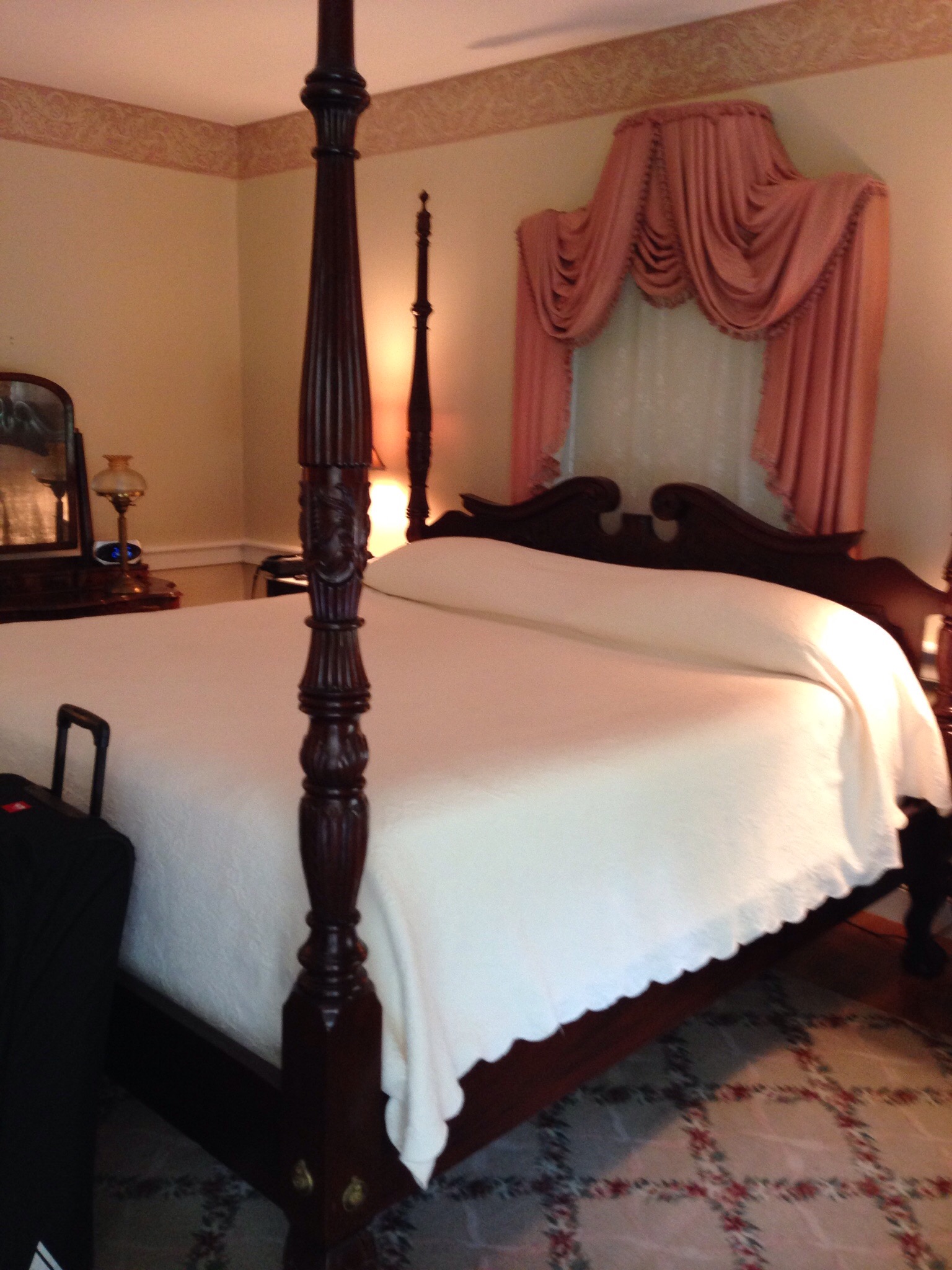 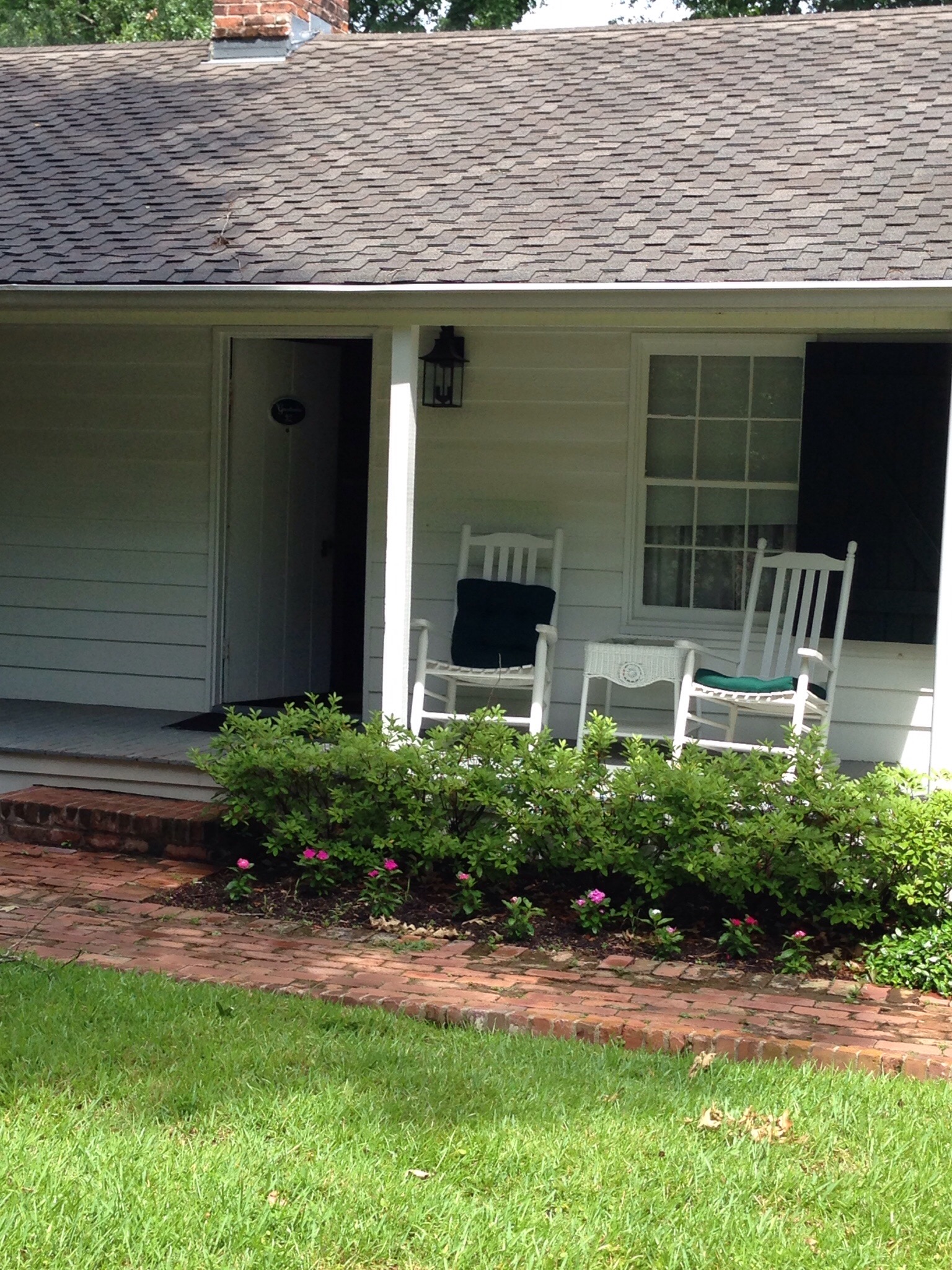 Some photos of the remaining pillars & sketch of the original house 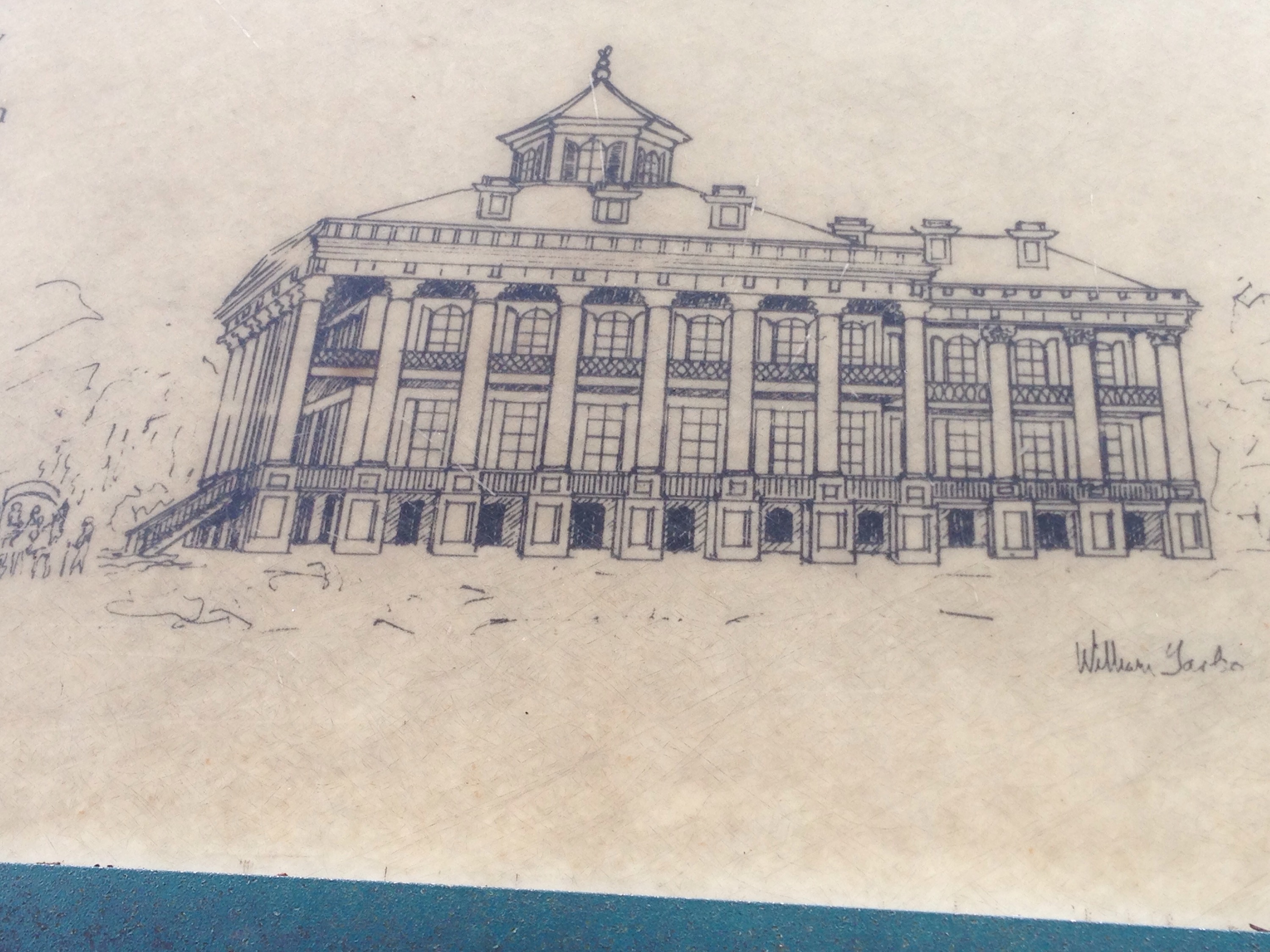 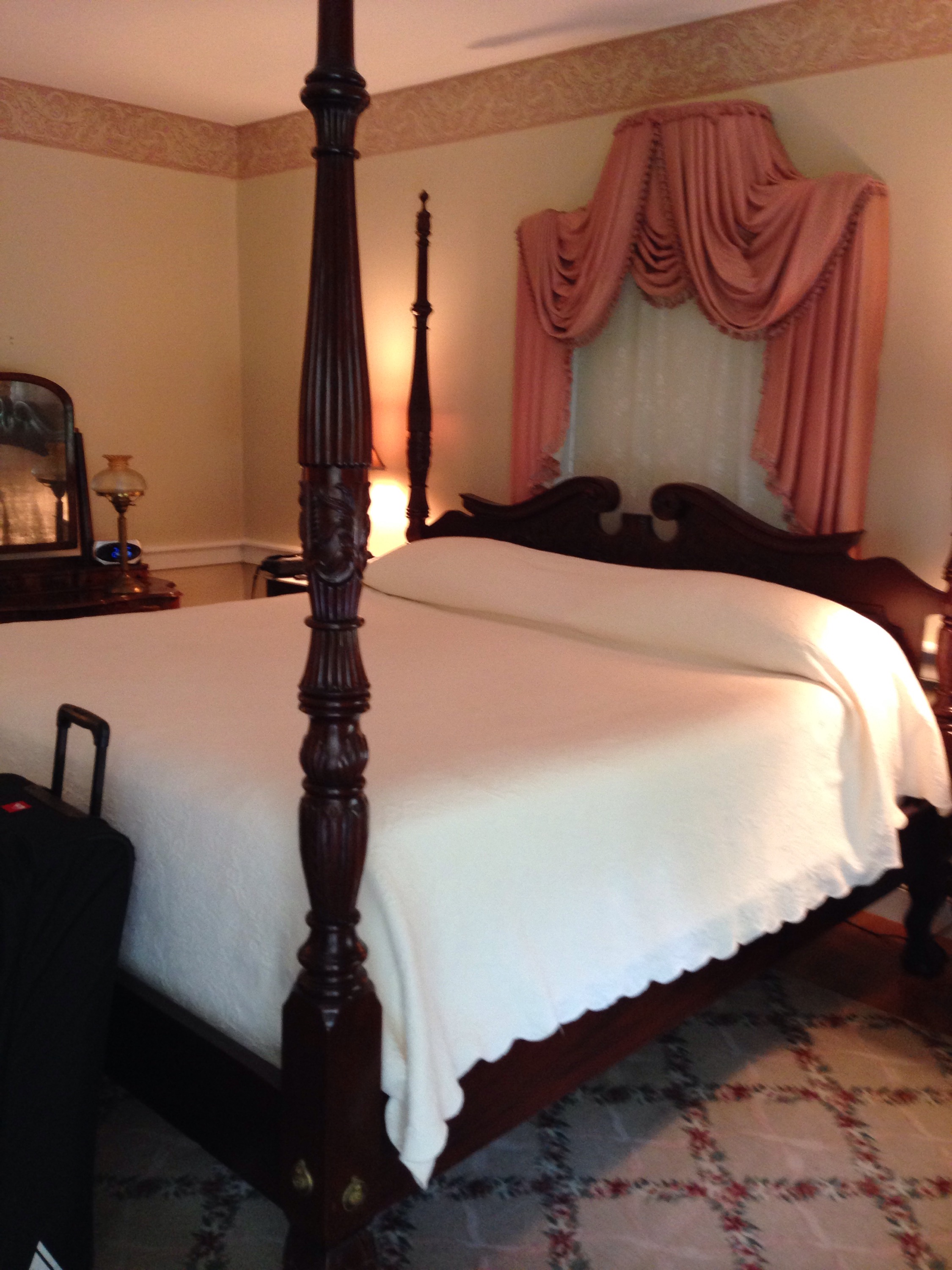 We left Vicksburg this morning after breakfast. As we were in a B & B the breakfast had to be taken between 8am & 9 am, a bit early for us but we managed it nevertheless. It was a fixed menu of coffee(tasteless), orange juice & then a plate of scrambled eggs, cheese grits, bacon, fruit & a biscuit of course. I’ll start with the biscuit—this is what I would call a bread bun but probably sourdough. The butter came in a little pack which listed the ingredients as ‘pulverised cream & salt’ with the added  rider ‘this product contains milk’. The scrambled egg was chopped up hard boiled egg with cream/butter added. The grits are made from oats so really it is a lump of porridge with cheese (tasteless) added, the bacon was crispy & given to Doug & the fruit minimal.

We hit the road & got on Interstate 61 again without any difficulty. The only traffic was the early bird church goers. I think I can truly say that I have never seen so many churches & they continued right along our route. Because we had plenty of time we decided to take the scenic route so deviated off onto the Natchez Trace Route. Last night Culpepper had told us about the ruins of a vast house that had been devastated in a fire. We saw the signs for it so deviated a bit further to find it. All that is left are huge Corinthian pillars soaring into the sky. It must have been a vast place in its day but worth the detour. We continued along our alternative road, finding impeccable toilets in a rest area (we are really talking about the middle of nowhere) & after about 2 hrs we arrived at our next stop over.

Again,  this is run as a B&B cum hotel & it has a dining room open to the public. It has ‘Gone with the Wind’ style architecture but this time we are in one of the garden rooms. We were too early to check in so went into town for visitor info & something to eat. Natchez is on the Mississippi which is huge at this stage. I don’t know whether the photos will capture the vastness of it. Again, Culpepper had recommended an eatery called Biscuits & Blues & this is where we refuelled. Very southern fare but did manage a salad each. I was reflecting on why dressings & sauces are so prevalent & have come to the conclusion that they are used to add flavour to intrinsically bland food. Doug added the theory that perhaps like in India they were used to disguise meat that had gone off. In this modern day of mass production I suspect that the sauces & dips bear no relationship to the original recipes. Talking of bears, we have passed several road signs indicating that bears are present, but I digress.

We are now installed & I have opened my case to find that something has leaked. Why it had to leak on clean clothes I’m not sure but at the moment our terrace & bathroom are festooned with drying clothes. There is no laundry service available here but one of the staff did offer to take my things away & launder them at home. How kind is that.

We are here for two nights & we are going to treat ourselves to a bit of R&R before moving on to New Orleans. It is very warm, about 30* but there are storms forecast. We have had one downpour already but everything dries up so quickly once it stops. We are on the fringe of a weather front that is causing flash flooding in Texas & states to the west of us.